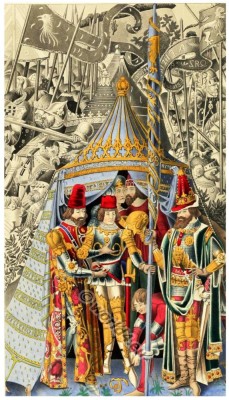 Pyrrhus Receiving the Honor of Knighthood

Pyrrhus Receiving the Honor of Knighthood

BEASONS of considerable force are adduced by M. Jubinal, in his splendid work on Early Tapestries, for believing that the Tapestry from which the accompanying plate is taken, was made in the earlier part of the fifteenth century. 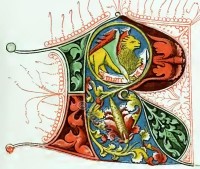 The tapestry itself consists of three compartments, all taken from the then popular subject of the war of Troy. The first compartment represents the city of Troy, with the arrival of Panthesilea queen of the Amazons to succour the Trojans. The second represents a battle, in which Æneas, Polydamas, Diomedes, and Panthesilea, are engaged in combat. In the third, which forms the subject of our plate, we see Pyrrhus the son of Achilles, under a rich tent, receiving the honour of Knighthood, with all the ceremonies practised in the Middle Ages. Ajax and Agamemnon are assisting at the ceremony; the former is buckling the belt of the young hero. An esquire is fixing his spur on his foot. Underneath are the following lines, “Loco patris Pirrus statuitur; Polidamas per hune succubuit; Philimines item comprimitur; Diomedes sic morte caruit.”
It is possible that the ornamental work in this tapestry may owe something of its detail to the imagination of the original artist; yet a comparison with other monuments of the time is sufficient to convince us that the costume and armour may be considered as very fair specimens of what was worn by sovereigns and princes during the fifteenth century.

The history of this tapestry is remarkable. It is said to have belonged once to the famous Bayard, and remained in the castle in which he was born (an edifice seated on the summit of a hill which commands the banks of the river Isere), until the beginning of the present century. When the castle was ravaged by the democrats in the great revolution, this tapestry was overlooked, and escaped destruction by a mere accident.

In 1807, it was discovered in the Chateau de Bayard by a distinguished artist of Lyon, M. Richard, who bought it of the proprietor of the place, and thus saved it a second time from imminent destruction, threatened in this instance by the neglect of its possessor. From M. Richard it passed, in 1837, to M. Achille Jubinal, who has given a faithful representation of it in his work on Tapestries, and who afterwards presented it to the Bibliothèque du Roi at Paris. It now adorns the wall of one of the stair-cases in that noble establishment. Our initial letter, which represents St. Mark the Evangelist, is taken from the same printed volume which has furnished us with initials representing the three other Evangelists. The wood-cut at the foot of the present page represents an iron knocker of the fifteenth century, in the possession of M. Dugué of Paris. It is seven inches and a half long.