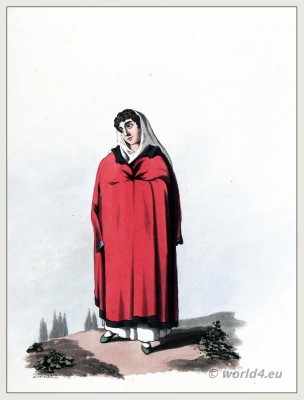 Lady of Lisbon of the Middle Class

LADY OF LISBON. Of the middle Class.

THE Ladies of Portugal are generally handsome, and in many instances may boast the highest pretensions to beauty.

Their features are regular, their dark eyes full of expression, and they are justly celebrated for the clearness of their complexion, and the interesting character of their countenance.
Though their figures are rather en bon point, they are well shaped, and seldom exceed the middle height.
In the costume of the Ladies of rank, which partakes of the English or French fashion, there appears nothing to constitute peculiarity; and all that is remarkable in the dress of those of the middle class, is a white handkerchief worn as a head dress, and a cloak resembling the capa, which is worn over the person.

Source: The Peninsula War.
Sketches of the country, character, and costume, in Portugal and Spain, made during the campaign, and on the route of the British Army, in 1808 and 1809.