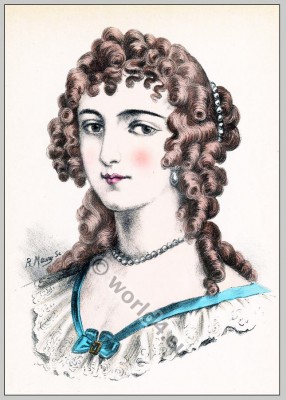 After the death of his wife, Queen Maria Theresa of Austria in October 1683, Louis XIV went to the Maintenon secretly a left-handed marriage (The right hand is the oath hand, the hand of the marriage alliance. The left-handed marriage granted the wife in the aristocratic society not full marriage rights, but was merely a special form of concubinage. Not a full legally binding marriage, morganatic marriage, not befitting). Until his death, he lived with her ​​and visited her every day in their rooms. The unclear relationship to the outside of the two and the fact that she was a little older than him, led to some talk on the court and in Europe.
In 1685 founded Madame de Maintenon in the town of Saint-Cyr-l’École (Arrondissement Versailles) a boarding school, Maison royale de Saint-Louis, for 300 daughters of impoverished noblemen – the Maison Royale de Saint-Louis. There she retired after the death of the king in 1715, without ever having to leave the place again. The tomb of Madame de Maintenon lies in the Chapel.