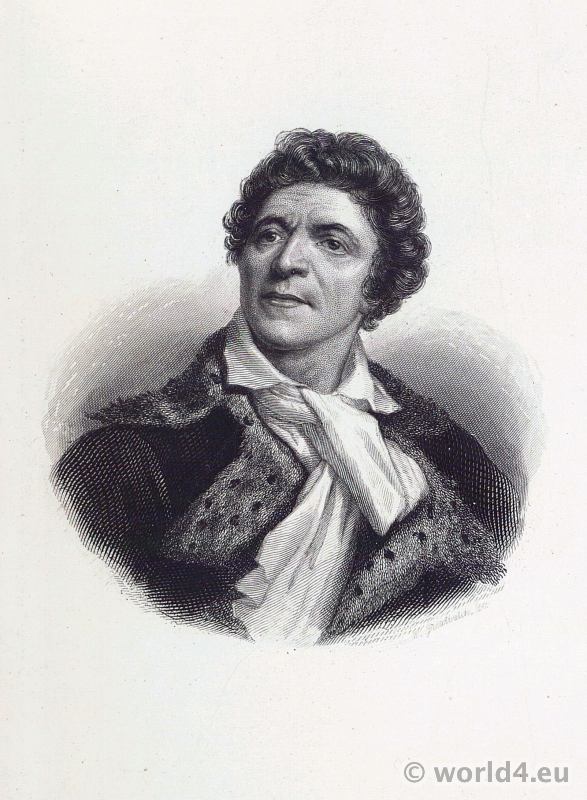 Jean Paul Marat was a physician, naturalist and author of scientific and political writings. During the French Revolution, he wrote the Ami du Peuple,
a newspaper that followed the practices of the counter-revolution with sharp polemics. He was on the side of the mountain party deputy in the National Convention and for a period President of the Club of the Jacobins. He was blamed for the September Massacres in particular by the propaganda of his political opponents. By the assassination by Charlotte Corday he became the “martyrs of the revolution”.

Marat was a native of Switzerland, who settled in Paris first as a horse-doctor; after which he practiced as a surgeon, and obtained some little notoriety for scientific researches. When the revolution broke out, he abandoned his profession, and became the editor of a journal called The People’s Friend, in which the king, the nobles, the clergy, and the old government met with unmeasured abuse.

In the new constitution he was one of the Paris Municipality, and president of the Committee of the Commune. He was afterwards the Paris deputy in the National Convention. A young Norman girl, 25 years of age, of poor but noble parentage, Charlotte de Corday by name, looking upon Marat as the head and chief of the Red Republicans, resolved to get rid of him. She was a religious enthusiast; and “Judith” was her model, whom “the Lord gifted with a special beauty for the deliverance of Israel.” Charlotte, living with her aunt at Caen [Car’n], conceived a romantic attachment to Madame Roland and the Girondists; and when several of them, who escaped the proscription of May, sought refuge in Caen, she called upon them to converse with them on her favourite theme.

On the 9th of July, she left her aunt’s house, and, on arriving at Paris, took an apartment close by the house where Marat was dwelling. Marat was ill at the time, and confined to the house. Charlotte requested by letter an interview, and called at half-past seven o’clock on the evening of the 13th. Marat was in a bath, but allowed the beautiful young girl to enter the room.

A coarse covering was thrown across the bath, and the two entered into conversation. The subject was the Girondists, who had taken refuge in Caen [Car’n]. “Before the week is out,” said Marat, “not one of them shall have escaped the guillotine.” Scarcely had he uttered these words, when the young girl drew a knife from her kerchief, and plunged it to the hilt in Marat’s heart. He gave one loud expiring cry, and sank back dead in the bath.

Some of the household entered; one felled the murderess to the ground with a chair, another trampled her under foot. A crowd gathered round the house; a commissary of police entered, and took the assassin to the Abbaye, the nearest prison. Two days afterwards, she was sent to the guillotine, and died saying, “One man have I slain to save a hundred thousand.” Her beauty was extraordinary, and gave a lively interest to her sanguinary but heroic conduct. Marat was almost deified for this assassination.* He was looked on as the Republican martyr. A splendid funeral was accorded him, in which every section joined; and a crowd of people, almost without number, followed in the train.

Four women bore the bath in which he had been murdered. Another carried on a pike his blood-stained shirt. Then followed eight bearers with the wooden bedstead on which he had been wont to sleep; and the corpse was laid on the bed, with its head exposed to view. Salvos of artillery were fired every few minutes. The cortege traversed all the principal streets, and rested at last at the Pantheon, where the remains were interred among the “heroes of the nation;” but ere long the whole feeling of the people was completely changed, and the mouldering idol was disinterred, and indignantly removed from this national mausoleum.

In appearance, Marat was ill- shaped, low of stature, and so ugly that he was the “scarecrow of children.” Though menacing all, and slaying without mercy, he was a desperate coward, and lived in daily dread of being assassinated. Even Danton and Robespierre were ashamed of being seen with him.

Like Masaniello, and others suddenly exalted to uncontrolled power, this hideous demagogue was intoxicated by success, and thought to gain notoriety by out-Heroding Herod. Of the three names of worst pre-eminence in the Reign of Terror, though Robespierre is generally the most execrated, Carrier and Marat were by far the most detestable.

Charlotte of Corday was doubtless influenced by patriotic feeling as well as private resentment in her attack upon Marat. The attempt of Staps on the life of Napoleon I. was actuated by a similar mistaken sense of public duty; as was that of Louvet, the assassin of the duc de Berri, in the reign of Louis XVIII.; of Alibaud on Louis-Philippe; of Orsini on Napoleon III.; and of many others. 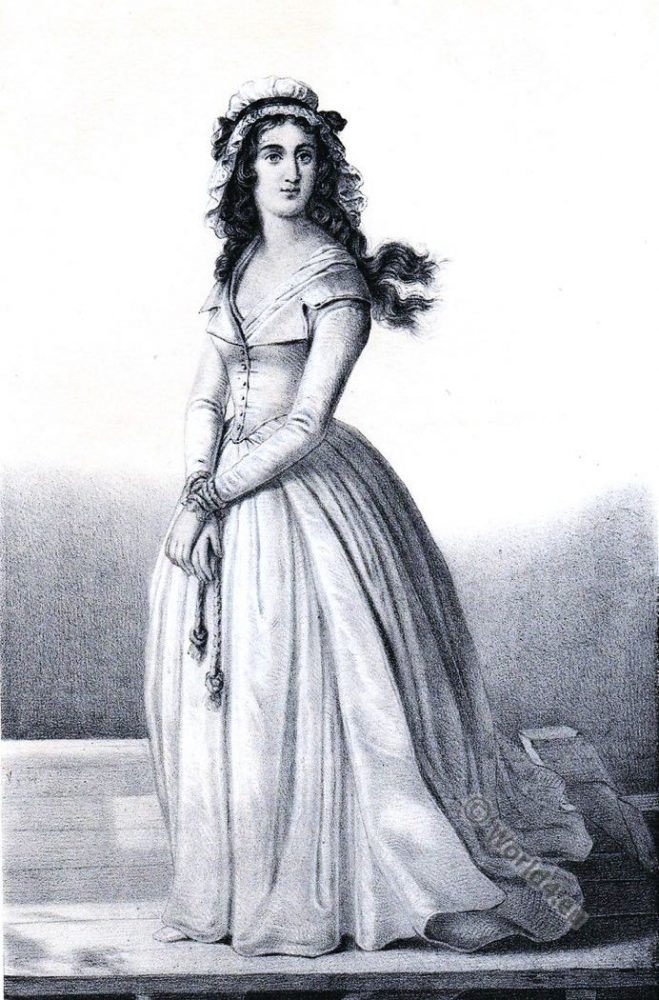 Charlotte Corday was rather tall, but admirably proportioned, with a figure full of grace and dignity. Her hands, arms, and shoulders, were models of beauty. An expression of gentleness and serenity characterised her fair oval countenance and regular features. Her open forehead, dark well-arched eyebrows, and eyes of a deep grey colour, added to her grave and meditative appearance. Her nose was straight and well formed; her mouth serious, but very beautiful.

Like most of the Norman women, her complexion was transparent ; and thick brown hair fell in curls round her neck and shoulders. Some few years after her death, an old man was asked if she really were so very beautiful. „Aye,” replied the old man,” there are none such now.”

Source: THE POLITICAL, SOCIAL, AND LITERARY HISTORY OF FRANCE: BROUGHT DOWN TO THE MIDDLE OF THE YEAR 1874. THE REV. DR. COBHAM BREWER.