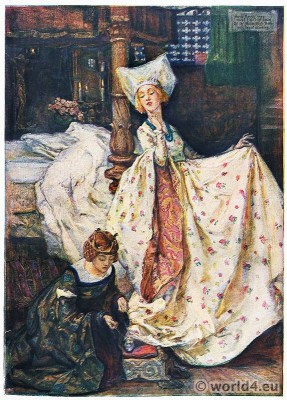 Mary Young Hunter (1872-1947) born in Napier, New Zealand. After the death of her father Edward Towgood in 1882, she moved with her mother Edith Towgood and her three siblings back to England. She studied painting in Newlyn, Cornwall, and at the Royal Academy, where she met John Young-Hunter (1874-1955). His father was Colin Hunter, a well-known marine painter and member of the Royal Academy of London, his mother was Isabella Young Rattre an excellent and important pianist. John received a chosen high aristocratic education, visited Clifton College and the University of London, studied under John Singer Sargent at the Royal Academy of Arts . Mary and John were married in 1899 and spent eight months in Italy to travel back through Germany and Belgium to England. They belonged to the higher London society,  Johns parents friends were John Singer Sargent and Lawrence Alma-Tadema. They made a name for himself as portrait painter. 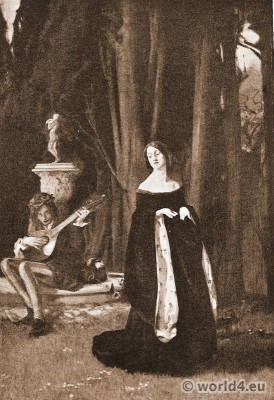 ” The Wanderer.” By Mary Young Hunter.

Exhibitions in the National Tate Gallery London and Luxembourg Museum in Paris (Paris Salon, Medal 1914) followed. From 1900 to 1913 they exhibited at the Royal Academy. Both are associated with the late Romantic art movement of the Edwardian Pre-Raphaelites. In 1906 their daughter Gabrielle was born. In 1915 they moved to the USA. From New York its first station they moved on to Taos, New Mexico. 1921 the couple separated and Mary Young Hunter moved to Berkley California where she died in 1947. John was fascinated by of the so-called Wild West since he had visited in London Buffalo Bill’s Wild West Show. His painting had since his arrival in New Mexico, the landscape, the Native Americans and still life as a subject, as opposed to the society portraits of his English years. John died in 1955 in Taos.