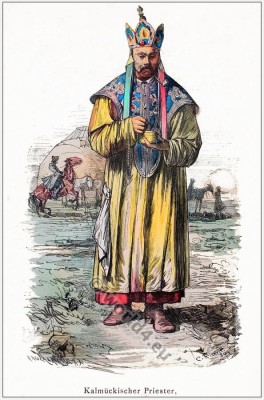 The Kalmyks are a Buddhist, western Mongolian nomadic people. They live mainly in the autonomous Russian republic of Kalmykia. They belong to the Asian strain of the Oirat, in China they were called Dsungars. One area in China is still called that Dzungaria. As part of tribe in the wake of Genghis Khan, they controlled large areas of Central Asia and Russia.

Note:  The spirit or ghost dance headdress of the Apache.