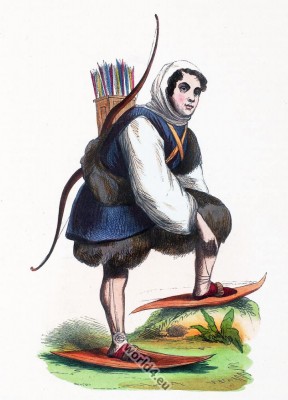 The term Samoyedic peoples (Samodi peoples, Samoyed, Samojadj) summarizes those peoples, populations or groups of people who are using in the history Samoyedic languages.

Originally they lived as nomads and subsisted on their reindeer herds, fishing and hunting. Today, they are largely sedentary. Some of these groups lived in the 19th century in parts of Central and South Siberia. The Nenets or Jurak-Samoyeds are scattered along the coast north-eastern Europe and western Siberia, from the estuary of the Northern Dvina up to the estuary of Yenisei. This includes the tundra region along the White Sea, the Kanin Peninsula, the Small tundra between the estuary of Mezen and Pechora, the Great tundra between Pechora and the Urals and the Yamal Peninsula. The Nenets are divided into two groups. They differ in language and way of life. The reindeer herders of the tundra are called Tundra Nenets, while the Juraks the taiga region in the north of the Middle obs as Forest Nenets are known. Through their nomadic or semi-nomadic lifestyle, the Nenets are forced to live in portable tents. Their frame consists of 30-40 bars, which is covered in winter with double reindeer fur.

In the summer, soft-boiled birch bark is used. The tents are very basic. The fire is lit in the middle of the tent on an iron plate. The smoke dissipates at the top of the roof. Over the fire a pot hanging on metal rods. The beds are made of willow, which are covered with hay and reindeer skins, and are located on either side of the entrance. Opposite the entrance there are domestic goods, vessels and other household equipment. The size of the tent shows the wealth of the owner. The clothing consists of a sheath of inverse (with the fur inside) reindeer fur hooded. In addition, the “sawak” pulled when it is very cold, with the fur outside. Their pants ends at the middle of the legs. In the summer of discarded winter clothes are worn.

The women wear long coats made of double reindeer skin, which is decorated at the hem with an extra fur trim. At the top they wear fur caps, which are decorated with metal ornaments and glass beads. The tribes system of the Nenets survived until recent times. Each tribe had its own, well-defined area for grazing, hunting and fishing. These strains were connected to the clan. At the beginning of the 20th century there were over a hundred tribes. A characteristic feature of this system was the common hunting and fishing. The booty was divided was not only among the members of the expedition, but also among the folks back home, elderly, the sick and orphans. The Nenets live today partly in villages and towns. The traditional way of life is greatly altered by technical innovations (motor boat, snowmobile, helicopter) or lost entirely. Today 41,302 Nenets live in the European part of Russia and the North West Siberia. On the West Siberian Yamal Peninsula live about 4700 Nenets nomads.

The oil and gas production on the Yamal peninsula threatened the habitat of the Nenets. Unemployment among the indigenous people who have little chance of alternative sources of income to hunting, fishing and reindeer herding is great. Alcoholism is widespread, the suicide rate is high. The life expectancy is even only 40-50 years.

The Finnish film director Markku Lehmuskallio has made with Anastasia Lapsui, several films about the life of the Nenets.