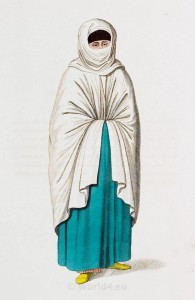 A Turkish woman in a provincial dress.

A Turkish woman in a provincial dress.

No dress can possibly be better calculated to conceal the person than that worn by the Turkish females, both in Constantinople and the country, whenever they appear abroad. No woman is ever seen without her maharmah, which is generally formed of muslin; one part of which fastens under the chin, and encloses the head, the other crosses the mouth and nose, and admits only space enough to see from. They also constantly wear a feredje, which entirely envelopes the whole person.