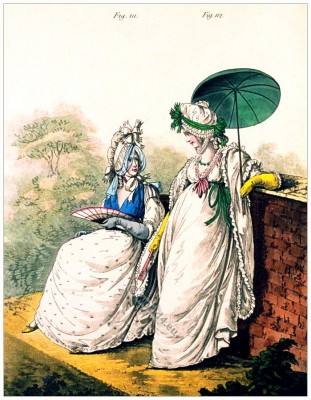 MORNING DRESSES.
FIG. CXI.
The toupee short and straight; the hind hair turned up plain, the ends returned and formed into a ringlet on each side the neck. Bonnet of dove coloured silk, formed into a hat, trimmed with broad lace and white silk riband, tied under the chin with the same. Veil of blue gauze. Round gown of embroidered muslin; short full sleeves, drawn and plaited on the shoulders. Blue silk handkerchief. Grey coloured gloves. Yellow shoes.

FIG. CXII.
The toupee cut short all combed straight, plain chignon; cap of clear muslin, the cawl drawn behind into the form of a rose, trimmed with a double border of lace, broad green striped riband, forming a large bow in the front and behind; lappet of plaited muslin round the chin. Round gown of thick muslin, with a narrow plaiting of lace round the neck; narrow pink riband tied loosely round the neck. Sash of green striped riband. Cloak of thin muslin, trimmed with the same. Necklace of large beads. Yellow gloves and shoes.