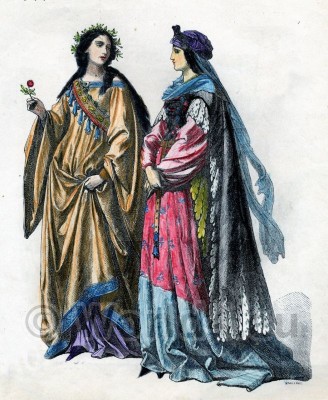 The left figure shows an unmarried woman, which is characterized by their uncovered hair. Her long hair is braided in some cases, combined with false hair pieces and decorated with a wreath of flowers.
Both women are wearing the round-cut cotta, or Gamurra with long, lush ornamental sleeves. The Gamurra was closely fitted top and highlighted the figure of the woman. The section was mostly kept around. The sleeves were richly decorated and fanciful, usually sewn only slightly and could be replaced. As material precious materials were used. Furs from Russia could be introduced by the brisk trade, the Italian textile manufacturers, provided the highest quality fabrics such as satin, gold-embroidered brocade, bright silks and velvets, patterned as a novelty. The movement, in such clothes, was slow and stylized. The colors dominated greens, reds and yellows.
Strengthened by the bourgeoisie in the cities of the Middle Ages, with its guilds, a sophisticated tailors’ guild was formed, which dominated the fashion required for this narrow, body-hugging cut.
Under the Gamurra dress the woman wore the loose-fitting Chemisse that set by the wide sleeves and round decorative cutouts, bright points and gave the richly decorated dress additional visual complexity. Popular were the embroidery of seams, especially at the neckline, different colors emerged.

Over the Camurra they carry Cioppa, a robe with ornate hem in bright, clear colors. The Cioppa worn belted high, with long sleeves and trim is made of a train. It is on this figure, the clothes edge, occupied houppelande, a fashionable decoration of the Middle Ages.
The right-married woman wears a head covering the sella, with a long veil.