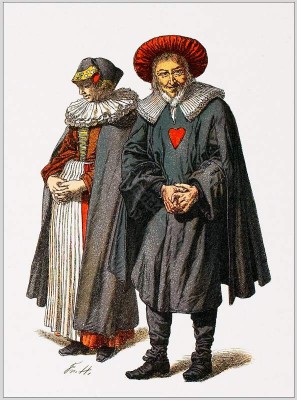 In the clothing of the Jewish population of Nuremberg was in the early 18th Century the traditional caftan out of sight. Instead a jacket worn in the style of the french Justaucorps, with its huge cuffs was. But the overcoat did not belong to of the then fashion, it was an un belted overhang after the pattern of the late medieval “Tappest” that was worn open at both ends.

Approach, he repeated the same pattern that was already centuries before peculiar to the Heidelberg Jews, and looked even more than this, like the old testamental “shoulder gown”, the “ephod”. That it has served as the official dress, can not be assumed, otherwise it would have been certainly not afflicted on his chest piece with the Jewish character. This character, otherwise a yellow ring was here a red heart, red was also the big folds-barett and probably also prescribed in this color. A consistent characteristic of the Jews was the beard, and no one else was wearing a beard at the time, not even the farmer. The Jewish population contributed to this period the hair long, as it was also customary in the peasant population. In the urban population, it was common practice to wear wigs at that time.

Jews who came from outside the city were forced to wear a hood or cowl instead of Barettes. Also had to go after them a woman in the rain cloth at every turn, while the harassed had to pay the unsolicited service itself.

The clothes, which denote the Nuremberg Jewish woman, passed in a long black coat with a collar-like cut from fabrics and a curly black forehead hood with yellow edging and red lining. Otherwise the forehead hood was black only exceptionally. The jacket had a nearly circular cut, as a result he joined the neck well, more or less smooth fell over her shoulders and only downward passed into folds. The great millstone ruff, closely ribbed or placed in large flattened tube folds shared the Jewish with the Christian wardrobe.