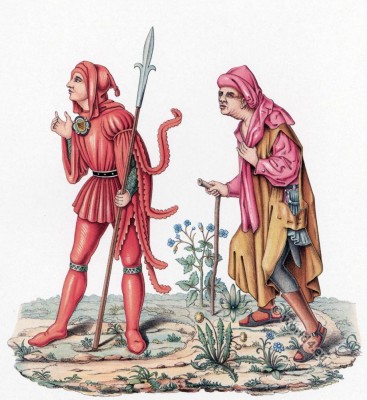 Costume of a court messenger, towards the end of the 15th century, from a painting, which are “the most remarkable events in the life of St. Sigismund in 16 departments” and is provided with the year 1497. It is kept in the lower sacristy of the cathedral at Freising.

As court messenger this figure is drawn particularly by the clasp on the chest, with the sign of the authority concerned and by the spear in his hand.

The second figure is illustrative of a painting of the Upper Bavarian school in the Bavarian National Museum, the crucifixion of Christ. In the figure-rich environment of the painting, the artist has depicted personalities of his time from a variety of stalls, under which the present figure, a bedraggled man in peasant costume, in the middle of the image, listless passing by the crucifixion.The artist probably wanted implying that Christ suffered for all mankind.