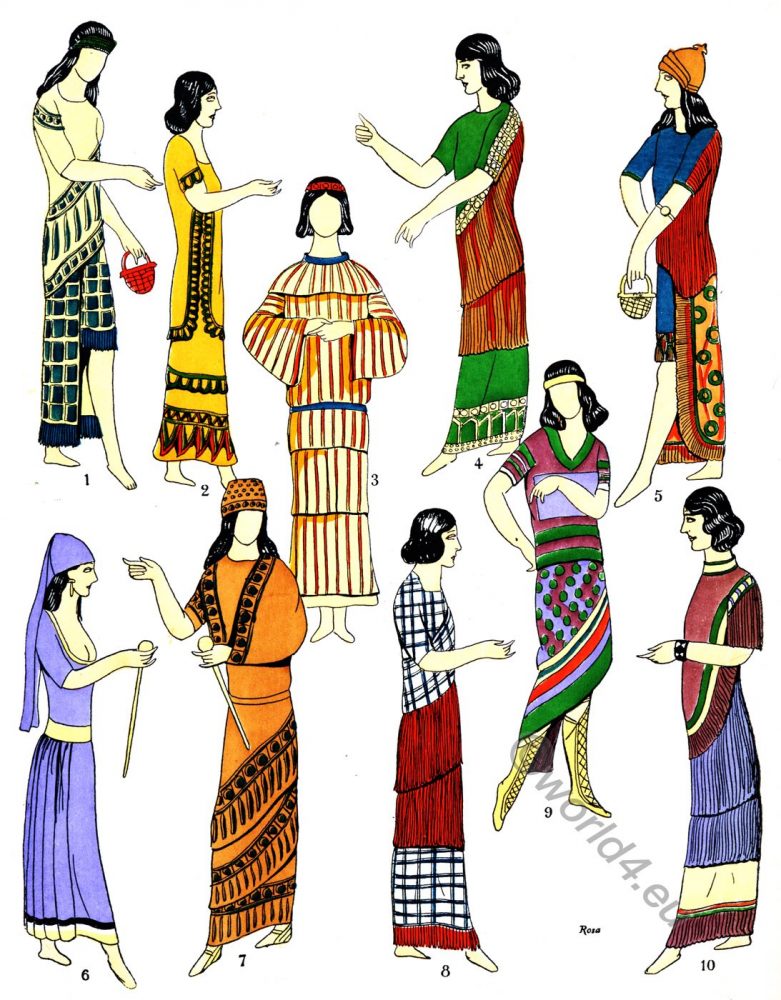 Of all the women of which antiquity was so proud, the most warlike – or, as we should say, the most sporting – were the Amazons.
These women wore Phrygian caps, sometimes adorned with pearls, provided with strings, and a neck protector, under their helmets. This was not really necessary, and was possibly merely a symbol of the independence affected by this nation.

Perhaps this elegant but warlike lady, falling in battle, is the beautiful Queen Penthesilia, who came to the help of the Trojans after the death of Hector. She was killed by Achilles, who, as she lay dying, wept over her youth, beauty and valor.

The Amazons, an incredible race of warlike women, came, we are told, from the Caucasus, and established themselves in Asia Minor, in the vicinity of the land of Thermodon, where they founded the city of Themiskyra (Strabon). In the reign of Theseus, they invaded Attica. They are to be found throughout the mythology of Greece, but no light is shed upon their social organisation; for example, we do not know what were the duties of the husbands of these bees.

The dress of an Amazon covered her whole body, with the exception of the left side, which was left naked as far as the breast. This dress, the bottom of which never reached lower than the knees, was held up by a knot. They kept the left breast in order to suckle their daughters, and burnt off the right breast in order to be able to bend their bows with greater ease. They carried two lances. Strabo, while corroborating this sacrifice of the right breast, burnt off at a very early age, adds that it enabled the right arm to manipulate the battle-axe with greater ease. The buckler (pelta) was shaped like an ivy leaf. Each Amazon made her own helmet and chinstraps. The remaining portions of their fighting costume were made from the skins of wild beasts.

THE ACROPOLIS OF SUSA.

Monsieur Dieulafoy has discovered in the ruins of the Acropolis of Susa, the blue diadem, striped in white, and the withe clavas of the purple tunic worn by Darius in the mosaic at Pompeii, the weaving of these garments being a special royal prerogative. The cloak, headdress, jewelry and arms, were worn by kings and their most important subjects (men and women alike). Even the Immortals themselves wore the crown and Median cloak.

This garment, the principal one, consists mostly of a close-fitting tunic, passing from the collar to below the knee, the sleeves of which scarcely reach the elbow. The bottom of this kind of tunic, the opening through which the head passes, and the ends of the sleeves, are embroidered with designs of rosettes surrounded by squares.

A broad belt encircles the waist, a simple band adorned on its edges with slight embroidery sometimes completed by a cord. The ends of the cord were joined to maintain the belt in place. A band appears to hang from this belt and is adorned with the same embroidery of rosettes seen on the tunic, and then it passes underneath and appears between the legs. It is then divided into four cords, each of which is knotted near the end, and leaves a fringe hanging at the back to the left, and at the front to the right.

The garment wound round the body in the form of a short skirt is most remarkable because it is not pleated, but has seven wide angular gussets as stripes, of which the two ends appear to be only the Heating ends of the belt.

Over this tunic is thrown a wide scarf from which hang long fringes which fall to the knees, where they end regularly at the same height, leaving the remainder of the tunic uncovered, to the lower edge. The scarf crosses the back and the breast, passing over the right shoulder and under the left arm. As it is oblique, the fringes also, being all ofthe same length, have their ends on an oblique line. These fringes cut the horizontal line of those formed by the belt.