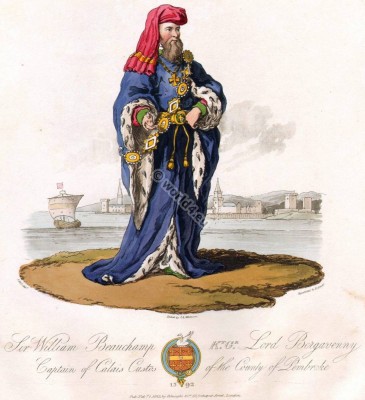 1st Baron Bergavenny, KG. Captain of Calais. Custos of the County of Pembroke in 1392.

William was the second son of Thomas de Beauchamp, 11th Earl of Warwick, from his marriage to Katherine Mortimer, the daughter of Roger Mortimer, 1st Earl of March. He was born about 1343. As the youngest son, William was originally intended for the ecclesiastical career. In the years 1358-1361 he studied at Oxford. 1361 died two of his three brothers, which is why William struck the secular career. 1367 he was knighted and participated in the army of Edward, the Black Prince (from 1330 to 1376) at the Battle of Nájera in Castile. In 1376 he became a Knight of the Garter.
In July 1373 he took part in the army of John of Gaunt, 1st Duke of Lancaster (the founder of the British Royal Family Lancaster) in a prey and destruction campaign by France.
In the years 1378-1380 William served as administrator of the royal household of King Richard II. The role of William, whom he played during the stormy reign of Richard II is not entirely clear. In the years 1383-1389 he was captain of Calais, 1399 to 1401 he was general counsel of South Wales and Governor of Pembroke.

Note:  Medieval women costume in the reign of Charles the Bald.