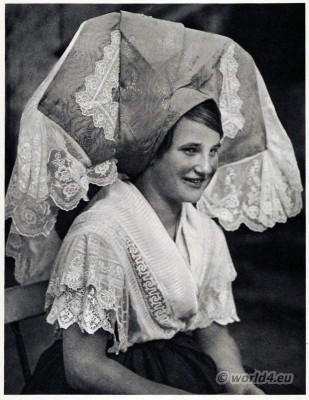 German Sorbian, young peasant girl from the Spreewald in traditional Sorauer costume, circa 1930.

Spreewald is made up of the German terms from the river Spree and Forest. The Spreewald is a marsh and river landscape in the east of Germany, west of the Oder River, south of Berlin. The area is famous for its canals and its natural beauty. The inhabitants belong to the ethnicity of the Sorbs or also called Wends, and are West Slavic people. They belong to the German Christianized natives. They still speak their own language.They settled in the country since the sixth century. In the first half of the 6th century AD left their ancestors in the course of their migrations former residential areas north of the Carpathian Mountains between the Oder and the Dnieper and attracted over Silesia and Bohemia to the west, where they reaches in the 6th Century the area between the upper Neisse river in northern Bohemia and the river basin of the Saale populated with the Saxon foothills of the Ore Mountains and the Flaming.