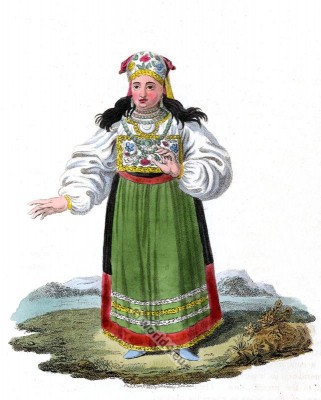 A Woman of Esthonia.

THE Esthonians vary in exterior appearance and stature, but, in general, they strongly resemble the inhabitants of Finland. The state of oppression in which they live, their poverty, their education, and their general habits of life, have inured them to the severity of the climate, to indigence and humiliation. They are of a lazy disposition, dirty, and drunkards. The women undergo fewer hardships than the men, and are not deficient in beauty or vanity.
The men dress like the peasantry of Finland, excepting that all of them do not suffer the beard to grow. The dress of, the females is pretty, and, very much resembles that of the women of Sclavonia.
They wear stockings, and shoes, or slippers: the sleeves of the chemise are wide in the upper part, and narrow at the wrist: they also, wear long aprons, and a sort. of corset or stomacher, which only reaches to the petticoat. They ornament the neck with a collar of glass pearls, which descends upon the bosom, and as it consists of several rows, serves at the same time for a neck-kerchief: The borders of their garments are embroidered, and the corset is either made of variegated stuff, or cloth worked in different colours. The lower part of the petticoat and apron is decorated with a border six inches deep, made of a stuff different in colour to the petticoat. The girdle is also prettily ornamented.
The villages of Esthonia are small, and the habitations dirty. They consist of small huts, constructed with beams of timber piled one upon, another. This is the usual architecture of these northern nations; with wood and a hatchet the peasant builds his hut, without the assistance of any other tools. These huts are small, but warm and suitable to the climate, since they are more easily heated. in the severe winters. This people were formerly Roman Catholics, but force had a greater share in the conversion than , conviction. Towards the middle of the sixteenth century they were made to embrace the Lutheran faith. When the Knights of the Teutonic Order made a conquest of Esthonia, the inhabitants were declared their vassals, and considered as a part of their property; in which state they have continued to the present time. Their little villages are scattered about the territories of the nobility to whom they belong.