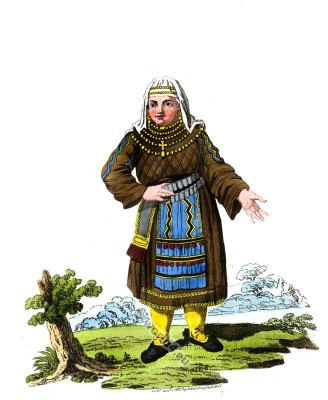 A Female Peasant of Finland.

A Female Peasant of Finland.

THE Female Peasantry wear shifts, trousers, stockings, and slippers, or shoes which only cover the heel, sole, and toes: they also wear a habit similar in form to a shift, not very long, but wide and without sleeves: their aprons are small, but not so their doublets or corsets, which very much resemble a shift with wide sleeves. The head is covered with a piece of linen, which descends to the shoulders and back.
The neck and throat are decorated with several rows of glass pearls: besides this ornament, they wear large ear-rings. In summer the petticoat and corset are made of linen, which they dye them-selves: sometimes they are trimmed with embroidery of various colours, and sometimes with small white shells. In winter their dresses are made of stout cloth, or sheep-skins. Their aprons are without plaits, but bedecked with embroidery, glass-pearls, fringe, &c. The girdle goes twice round the waist, and is fastened by a knot on one side; it consists of a band of skin or linen, about three inches in breadth, and is ornamented with fringe at the two extremities. The country women are industrious, and good housewives; they manufacture linens, and a stout cloth called walmer; they are also skilful in dying, &c.
The inhabitants of Finland have long professed the Christian faith, and followed the ecclesiastical constitution of Sweden. Their marriage and burial ceremonies differ, therefore, in no greater degree from those practised Sweden, than it is customary for individual provinces of all great states to vary from each other. A bride is obliged to present each of her guests with four or five ells of cloth, and a pair of stockings; who, in return, presents her with a piece of money; but as this is never equal in value to the cloth and stockings, and is always considered as the property of the bride, the marriage of the daughter falls so heavy upon the mother, that the following expression is become proverbial: “Talon howith aial:” The daughter’s wedding makes the farm poor.