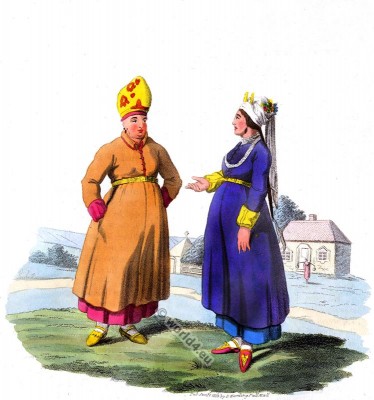 The Wife of a Cossack of the Don, and a Girl of Tscherkassk.

The Wife of a Cossack of the Don, and a Girl of Tscherkassk.

DURING the last twenty years, Tscherkassk, the capital of the Cossacks of the Don, has been considerably enlarged and ornamented with many beautiful private houses, inhabited by Cossack officers who have been invested by their sovereign with honours and titles; but the narrow and irregular streets of this city, the confined situation of its buildings, most of which have not even the convenience of a yard, and the annual inundations in spring, all conspire to render it extremely unwholesome, and for ever to prevent any effectual improvements. It is also impossible to speak favourably of the moral character of its inhabitants, of either sex. A continual habit of good living, indolence, and debauchery, have thoroughly corrupted their manners; and their ancient simplicity has been almost entirely superseded by luxury.
Tscherkask consists of eleven Cossack stanitzes, or districts, and the whole body of the Cossacks of the Don occupy one hundred of these stanitzes. The city of Tscherkask has an extensive traffic by sea, and might become a commercial town of still more importance, if the general quarantine at Kertsch, which has long since been proposed for all the ports situated on the coast of Azaf, could be effectually established.
The dress of the Cossack women and girls at Tscherkask, and in the neighbouring districts, differs in every respect from that worn above the lines of Tzaritzyn. It is a complete deshabille of a peculiar kind, as is obvious from the opposite Plate, representing the Wife of a Cossack of the Don, and a Girl of Tscherkask. In their domestic employments they go bare-footed, and wear trousers, which hang down as low as the ankles. When in full dress, they wear slippers and stockings of yellow morocco, in which they tuck the extremities of their trousers. The shifts are commonly of dyed cotton, or Asiatic silk stuffs, either of a yellow or blue colour. About thirty or thirty-five years ago, the women usually wore large triangular head-dresses, which were nearly eighteen inches in height, and of a similar breadth below, when measured from one angle to the other. At present, the head-dress, in general, corresponds with the one represented in this Plate, and that before mentioned is worn only in the vicinity of Severnoi-Donetz.