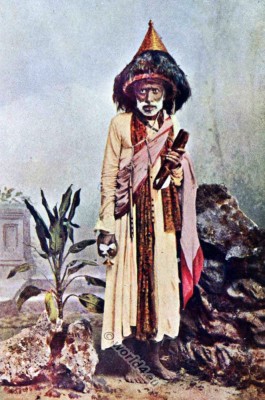 There are beggars and beggars, from the Hindu ascetic, who, after renouncing the lusts of the flesh, wanders from shrine to shrine, and meditates upon matters holy, to the gentleman delineated in the accompanying picture, who begs because he is built that way. Members of this particular caste have certain curious habits peculiar to themselves, and their headgear, if not their dress, is strikingly original. On the principle that the early bird catches the worm, they commence their rounds at three o’clock in the morning, standing outside a house and tinkling the little brass bell, which is one of their trade-marks, as an accompaniment to a doleful chant for alms. Patience and importunity are personified in an Eastern beggar. You may disregard his presence in the vain hope of driving him away in despair, and this, indeed, is usually the first method of procedure. But in no part of the wide world is the force of inertia better understood. He is used to cold neglect, and much more besides, so he calmly waits. Disregard may be followed by adjectives, but still he heedeth not. He’s used to that too. He repeats the monotonous wail, to the effect that he is a very poor man, a very hungry man; and has not the wherewithal to fill his internal economy. And as the smallest of coins is sufficient to rid one of his undesirable presence – even though in going he curse your want of liberality-he not infrequently reaps his reward.

But be it here remarked that, unless prepared to repeat the donation at frequent intervals, this method of treatment is not to be thought of, except as a means of temporary palliation. For your beggar, be he black or otherwise, has a knack, peculiarly his own, of never deserting his benefactors. On leaving your office at the end of the day, you are perhaps induced to give a coin to one of the many blind mendicants who swarm the thoroughfares. Henceforth he invariably awaits your coming, and, his youthful guide having marked you down, his persistent importunities move you to much profanity.
The Vasudev does not usually beg from Europeans, the reason probably being that he only “works” from three o’clock to eight a.m. One of the peculiarities of the native is his passion for remaining awake far into the night, and, on festive occasions, the whole night long, as many a long suffering Anglo-Indian can testify, the manners and customs of the inhabitants of the country at such times not being conducive to slumber within a radius of half a mile of the scene of gaiety.
The most original of stage· managers could surely never conceive for a Christmas pantomime a more grotesque form of hat than that worn by the Vasudev beggar. Shaped like a sugar loaf of huge proportions, the top part of it is covered with gold tinsel, while the lower half is gaily ornamented with peacock’s feathers.