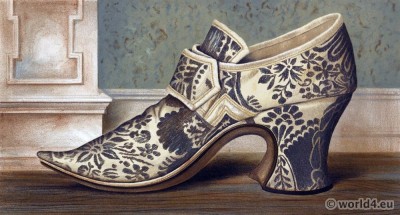 NOTHING can be ascertained about Mrs Brown, the owner of this magnificent shoe, except her name. It is made of cloth of gold; of which, although for the most part the threads of the brocade are now tarnished and blackened with age, there still remain a few inches which have withstood the ravages of time, and which serve to indicate with what brilliancy and effect the chaussure must have gleamed and sparkled when fresh from the hands of the maker. This shoe was worn with a large buckle, has an immense heel and pointed toe. It dates about the time of Queen Elizabeth (Elizabeth Tudor 1533-1603), and as it was procured in the vicinity of Kenilworth (namely at Leamington) may have figured at the revels and festivities there in its grand days.