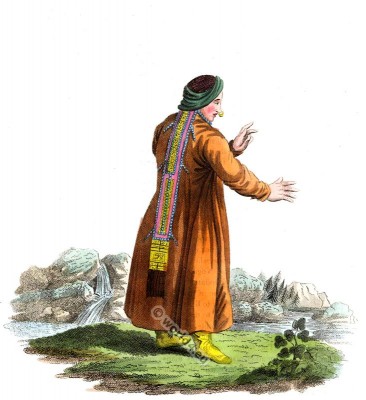 A Female of the Nogai Tribe of Tartars.

A Female of the Nogai Tribe of Tartars.

NEXT to the Kaptchak tribe, the horde of Nogai Tartars was, for a long time, the most celebrated of the west. It was founded in the thirteenth century by Nogai, Tartar general, who, after having subdued the nations inhabiting the northern coasts of the Black Sea, was unwilling that his conquests should become the property of the Khan of Kaptchak, and therefore formed a colony of his own, in the country he had conquered. We find it dispersed to the north of the Caspian Sea, along the branches of Caucasus and the northerrn and western coasts of the Euxine, near the Meotis Pall’s, on the banks of the Volga, in Kouma, Kuban, and in the ancient Taurca Chersonesus, to which it has given the name of Crimea; and lastly, on the banks of the Dneper, the Dniester, and even as high as the borders of the Danube. In the course of time, this horde subdivided itself into a variety of hordes, more or less powerful: some of which have repeatedly changed both their name and habitation. All, however, have preserved their original language; but it is much corrupted, and divided into as many dialects as there are distinct hordes.
The dress of the Nogais differs but little from the Tartars of Kazan. The females of several hordes wear an ornament attached to the hinder part of the head-dress similar to that worn by the Tscheremisses; it is loaded with beads of glass or coral, and several other ornaments. They decorate themselves with car-rings and bracelets; and sonic of them even pass through the nostrils a ring loaden with pearls and valuable stones, which descends as low as the mouth: this strange ornament is not uncommon to the females of Astrachan, and is generally worn by all those who dwell on the borders of the Akhtouba.
For a considerable time the Nogais were masters of Astrachan : some authors attribute to them the foundation of that town, while others assure us, that it existed before the incursion of the Tartars into the western countries. When this government was ceded to Russia in the sixteenth century, many of the conquered families submitted to the yoke, rather than abandon the place of their nativity. Their descendants are distinguished, according to their manner of living, into Tartars of the town, Tartars of the villages, and Wandering Tartars. The former occupy a considerable portion of Astrachan. Their Bazar, or market-place, contains many well-furnished shops. They carry on an extensive commerce with the Armenians, Persians, and Boukha-rians. Their manufactories of morocco, cotton, camblets, and silks, are highly celebrated. The women spin a cotton remarkable for the delicacy of its texture.