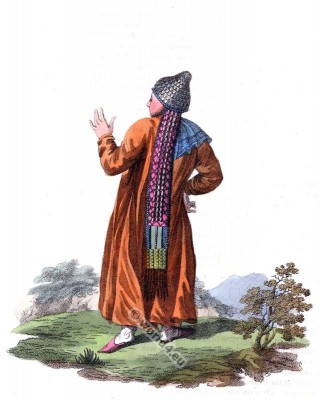 Back Figure of a Female Tartar of Kazan.

Back Figure of a Female Tartar of Kazan 1803.

SUBMISSIVE to the laws of the Alcoran, the Tartars can never possess more than four legitimate wives; each of whom enjoys the same rights. The purchase-money paid to the parents of the bride is called kalym. The agreement is celebrated by the Moullah or priest, who offers up several prayers on the occasion. The marriage is announced in the mosque, in the same manner as the bans are published in our churches. A few days previous to the wedding, the future bride is visited by her female acquaintances. They find her covered with a veil, and unite with her in weeping the loss of her virginity. On the eve of the nuptials, she is carried concealed to the house where the wedding is to be celebrated: she is there met by the female part of the bridegroom’s family, and receives their consolations and caresses. The ecclesiastical ceremonies are extremely simple. They are not performed in the temple, but the moullah is sent for, who asks the parties if they are desirous of being united in the bands of matrimony: on expressing their consent, he utters a short prayer, and declares them to be united. The husband does not conceal from his wife her state of dependance. The poor are obliged to permit them to enjoy an equality : but the richer sort never allow their wives to eat with them. They never go abroad without being veiled, nor shew themselves before strangers, even in their own houses, unless their husbands command them to appear; which is considered the greatest honour that can possibly be shewn to their guests.
The Moullahs or priests visit the sick, and pray over them. The dead are washed, and the body carefully enveloped in linen or cotton; except the head, which is left uncovered : after which they are sprinkled with water strongly impregnated with alum. The priest fastens on the breast of the de-ceased a paper, on which are written the following words in the Arabic tongue: “There is but one God, and Mahomet is his prophet.” Their burying grounds arc always out of the town: the men only are allowed to follow the funeral. The dead body is conveyed in a coffin, but is afterwards taken out, in order to be let down into the grave, which is about five feet deep, and dug from the north-cast to the south-west. On one side of this grave, towards the bottom, they scoop out another grave, in which the body is so placed, that the earth of the former may not touch it: as they are persuaded that two angels will shortly come to seek the dead body, and convey it to judgment. For three days no fire may be lighted in the habitation of the dead. Prayers are offered up for the space of four weeks after his de-cease, at the expiration of which time they conceive his judgment to be pronounced. Over the grave of their relatives the rich generally place a small wooden edifice, or a cubic stone, with an inscription in the Arabic language. As a specimen of these inscriptions, we shall present our readers with one which is to be seen upon a sepulchre near the river Diouma, in the neighbourhood of Ufa: ” Ghas-Housyam-Beg, a judge full of equity, and skilful in all the laws, is dead. We pray thee, only God, to pity him, and pardon his sins. He died in the 744th year of the hegira, on the seventh night of the sacred month. He projected; he wished to execute; but death puts a period to the projects of men. No one is exempt from death. In approaching this sepulchre, be mindful of thy end.”