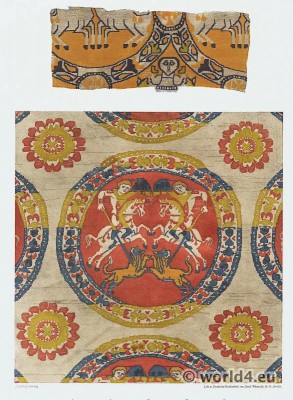 The pattern, incomplete, consists of circles, which by white Bands are formed with hook ring thread. In the circles obtained for each series two horses without riders with parts of the bridle. The circles on collision topped with slices in each of which one in Sasanian type stylized flower. In the gusset male figure, only to get to the chest, maybe sitting on an armchair.

b) silk. Basic yellowish-white. Pattern perhaps to constantly colored circles in rows sorted formed from strips with color Wreath thread. In every circle on a red ground a couple of horsemen, which a bottom-bouncing lions pierce. The Riders are in the late Roman costume. In the spandrels rosettes of heart-shaped leaves.

Byzantine, VI-VII. Century. The fabric is in the Church of St. Ursula of Cologne.