Costumes of the Byzantine Empire. First half of the VI. Century.

Fashion of the Byzantine Empire. 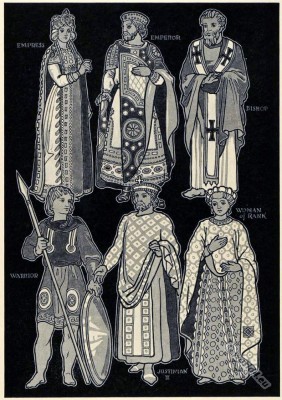 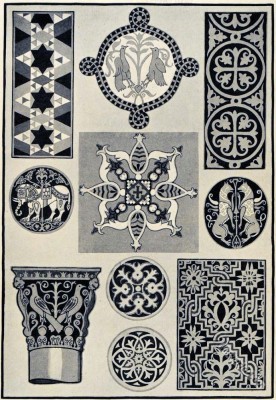 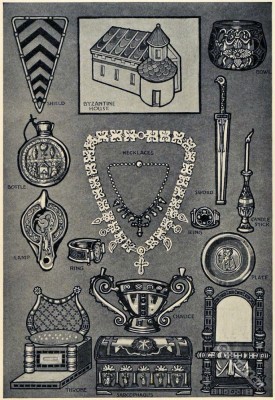 The dress of the Byzantine Empress.

The dress of the Byzantine or Greek emperors is not much older than the Eastern Roman Empire itself, for the Imperial raiment adopted by Diocletian and made still more magnificent by Constantine was soon disdained as “vain show” by the Emperor Julian, who ascended the throne only ten years after Constantine’s death.

Julian’s immediate successors attached just as little importance to it as he had done. Theodosius (379-395) was the first who thought it necessary to manifest his dignity in his attire as well as in other directions, and it was he who introduced the splendour which was continued by all the Greek emperors who came after him. This Imperial attire differed little in respect of cut and material from that of Diocletian. Like the latter, it consisted of a stola (From the beginning of the Roman Eastern Empire onward dress for the two sexes among the higher classes seems to have been the same.

For both sexes it is sometimes called stola and sometimes tunica.) of white silk heavily ornamented with gold at the breast and shoulders. It was, that is to say, a kind of shirt, long-sleeved and reaching to the feet (sometimes caUed talaris dalmatica), with a purple cloak, fastened at the shoulder with a precious clasp, adorned with a broad strip of gold embroidery (clavtis), and with ornaments pointed or round, embroidered or attached.

The royal attire also included shoes* of purple silk embroidered with pearls, a diadem with a rich setting of pearls, and the royal staff or rod of gold. This magnificent attire, it is to be kept in mind, was worn by the emperors not only on certain State occasions, but almost always, for the Byzantine Court was the most luxurious and dissolute of all Courts throughout the Middle Ages.

* The emperor alone was allowed to wear shoes of this kind, and therefore the phrase “This prince has assumed the shoes of purple” was equivalent to saying that he had ascended the throne.

In a large piece of mosaic work in the church of S. Vitale at Ravenna, representing the Emperor Justinian and his retinue about the year 547, the monarch is clad (see Fig. above) exactly as we have described, except that he is wearing instead of the stola a white tunica, reaching only to the knee, trimmed at the side with gold, and held in position by a red girdle, and also has on very tight purple hose. The clavus of his purple cloak is of gold decorated with red rings, in each of which is set a green animal resembling a duck. Three gold bracelets are on his forearm.

The Imperial mantle, like those of other Byzantines of high rank, was in shape a semicircle or other large segment of a circle (Fig. Byzantine Imperial Mantle). It was put on with the centre of the straight edge on the left shoulder. Then it was carried fairly tightly round the neck and pinned on the right shoulder so that it fell down on both sides of the right arm. This shape for the mantle and this way of putting it on were retained by all the Byzantine emperors.

The ornamentation, however, underwent repeated change, and by and by the mantle became stiff and unpliant, owing to the gold embroidery, the jewels, and not least to the heavy border studded with pearls and precious stones with which the whole garment was hemmed.

The clavus also was always put on this garment, and it too was lavishly adorned. Soon after Justinian’s death the method of wearing it was changed. The left side was raised and allowed to hang over the arm (Fig. Later Royal Attire of the Byzantine Emperors).