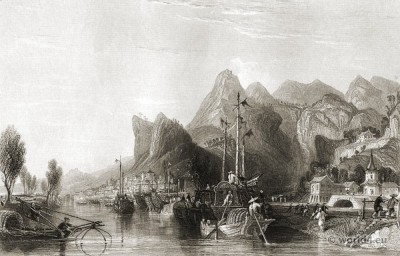 Se Tseaou Shan, or “The Western Seared Hills” of Guangxi.

About one hundred miles west from the city of Canton, a mountain group arises, as remarkable for the actual area which it occupies, as for the vast number of its abrupt and pointed summits. The eternal resting-place of clouds, it becomes the parent of many rivers, contributing also to swell the volume of the navigable and fertilizing Se-keang. The scenery of this rocky region is celebrated by all travellers and tale-tellers; but the riches of legendary lore do not constitute the only or the greatest treasures of the locality. Those are obtained by the appliances of art and industry – “gold, precious stones, silk, pearls, eaglewood, tin, quicksilver, sugar, copper, iron, steel, saltpetre, ebony, and abundance of aromatic woods.” These treasures, combined with the produce of the fertile plains that sleep around this mountain-mass render the province of Kwang-tung (Guangdong), the most wealthy, commercial and civilized in the empire. Never was mountain-scenery so illustrated by either legend or story-breathing epithet as the many-topped hills of Se-tseaou; there is not a crag in all these rude, romantic, rugged regions, that has not its tradition-there is not a natural form of any magnitude unmarked by some characteristic designation.
The form of the Se-tseaou is said to resemble “a floating dragon,” embracing within its sinuosities a circuit of at least fortify. Around it is drawn by nature, or some preternatural power, four deep and yawning dikes, called Keen-tsun, Sha-tow, Lung-tsin, and Kin, and from its summit start up, in broken yet conical forms, seventy-two conspicuous and lofty peaks. Like the towers of a fortress around the central keep, or the lily’s leaves around its sheltered cup, these tall peaks enclose and overhang Yan-Yuh, or “the Valley of Clouds,” a vast and fertile plain within them. The keen blasts from the east are intercepted by the peaks called Ta-ko. Down the centre of the Valley of Clouds flows a clear bright stream, having its springs amidst the “Heaven’s height,” and the “Heaven’s grove” summits, whence the water, falling in majestic sheets from one precipice to another, reaches at last the rocky reservoir that furnishes a copious supply to the river. The inhabitants of this happy valley have, with a natural and excellent judgment, conferred upon many of the surrounding objects names expressive of some characteristic property. The presence of mineral treasures is indicated by the names of Gold and Silver Wells, Iron Spring, and Jasper Rock. The bolts of imperial Jove have doubtless been often shivered on the sides and the summits of the Luytan-lun, ‘Thundermound,’ while the “Peak of the Genii,” and the “Spirit’s Hand,” and the “Nine Dragons,” have preserved in their legendary titles the fabulous records of these alpine regions, Underneath the “Rock Peak,” which closes the entrance of the vale, the stream that’ winds through its ranks suddenly from view into “The Bottomless Well,” and, after a subterranean course of more than half a mile, enters the Pearl Canal, which opens into the Se-keang, or Western river. How closely does the Moralist’s imagined seclusion from the pursuits of men resemble these faithful details of the “Valley of Clouds!”- “The place which the wisdom or policy of antiquity had destined for the residence of the Abyssinian princes was a spacious valley in the kingdom of Ambara, surrounded on every-side by mountains, of which the suirimitg overhang the middle part. The only passage by which it could be entered was a cavern that passed under a rock, of which it had long been disputed whether it was the “work” of nature or of human industry.’
Amongst the numerous occupations that minister to the necessities, happiness, and wealth of the inhabitants of the Se-tseaou-shan, fishing constitutes one of the most constant. Not content with the tedious rod of the hook and line, the Chinaman uniformly employs the more unfailing mushes of a finely-woven net. The barge or flat-bottomed boat employed in this service, is supplied with two levers, rude long poles tied together at one end, but having a net, with its suspension-frame of crossed hoops, depending from the other. The manager of the machinery allows the lever to ascend just as many feet as he desires that the net should sink in the water; and, after waiting a reasonable time for the fish to be attracted by the bait, he draws the tied ends down again, by which means the net is raised to the surface, at the stern of the boat, where an assistant is in readiness to secure the draught. This mode of fishing is essentially the same as that pursued by the fishermen on the coast of Hong Kong island.

Gallery: China, in a series of views, displaying the scenery, architecture, and social habits, of that ancient empire. Drawn, from original and authentic sketches, by Thomas Allom. With historical and descriptive notices by the Rev. G. N. Wright.