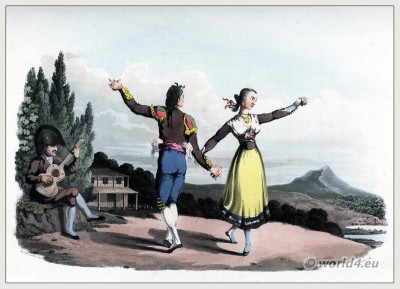 NOTWITHSTANDING the general gravity of the Spanish character, the dances peculiar to this nation are remarkable for the vivacity of their movements, which people of all ages and conditions delight to indulge in.
To the ear of a stranger, there is nothing in the melody or measure of the music, which is calculated to cause such exuberance of action: but to a Spaniard so irresistible is its effect, though not joining in the dance, as to impart an electric influence which sets the whole body in motion.
These airs are adapted to the guitar and tambourine, to which the Dancers keep time with castanets.
The Fandango and Boleras, each performed by one couple, are the favourite dances.
There is also a third, called the Seguidillas, danced by eight persons, something like a Cotillion, but partaking of the graces of the Fandango.
When the Fandango is exhibited on the stage, the performers are dres sed in the Andalusian habit: but this sketch represents a Madrilenian and Leonese.

Note:  Folk costumes from Hamburg and its surroundings. The Vier Lande.