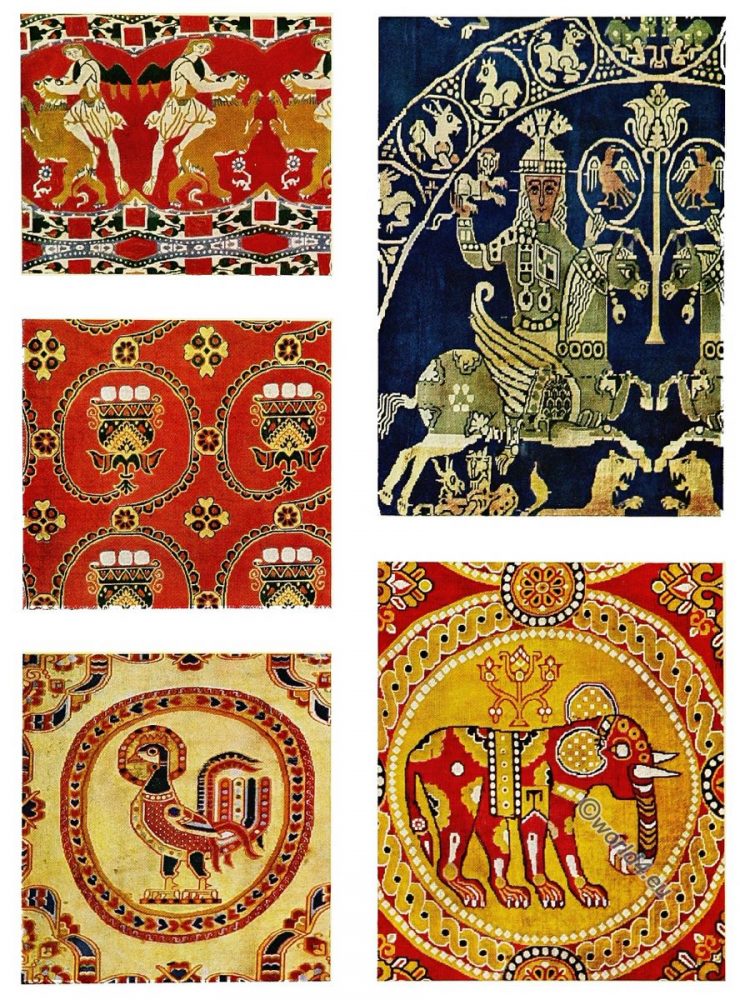 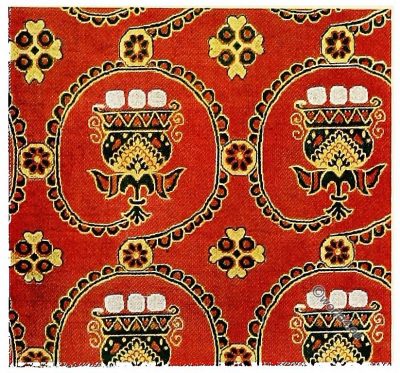 The larger remnants of fabrics which have been preserved in considerable quantities seldom date earlier than 400 A.D. Such pieces were discovered as early as the beginning of the 19th century in Upper Egypt, and although they were placed in the British Museum and in the Louvre, little attention was paid to them.

Numerous examples have been found in the necropolis of Sakkara to the west of Memphis, and in that of Akhmim, which marks the site of ancient Panopolis, as well as in the ruins of Hadrian’s city of Antinoe (founded 122 A. D.), in Fayum, and among the ruins of Bâvit. The textiles which were discovered supply us with exact information as to the shape and ornamentation of late antique garments. They consist of tunics with long or short sleeves, large cloaks like garments known as togas, shawls and wraps. According to the season they were either of fine linen or a sort of rough linen plush.

Among the fabrics were also large covers and curtains patterned with figure designs. The shirt-like garments are only patterned with bands (angusti clavi) which come down over the shoulders and breast, and with narrow borders at the edge of the sleeves. The more ornate examples have roundels or bands (clavi) either tapestry woven or appliqué work on the shoulders and level with the knees, while the surface above the waist is s e m e with colored leaves or ornamented with broad patterned bands (tabulae). The lower hem of the garment is edged with a band or rectangular pattern (gammadion). Judging by remarks in the papyri collection at the Berlin Museum pattern-books supplied the craftsmen with designs.

The figure motifs on the clavi and tabulae may be chiefly traced to the influence of Graeco-Roman traditions; in some cases to ancient Egyptian sources. Sometimes they represent either mythological or Biblical scenes, and bear Coptic or Greek inscriptions. These garments were formerly ascribed to Coptic weavers, a Christian sect who were supposed to have sprung from the ancient Egyptians. Hence these fabrics are termed Coptic. They may be conveniently divided into two groups. The more ancient specimens (known as Hellenistic) show distinct traces of Greek tradition with their clear-cut patterning in dark blue and violet wool and a few small colored designs. The more modern specimens, dating from the end of the 7th century (known as Coptic), are distinguished by the variety of their bright colors and very primitive figures depicting Biblical characters. 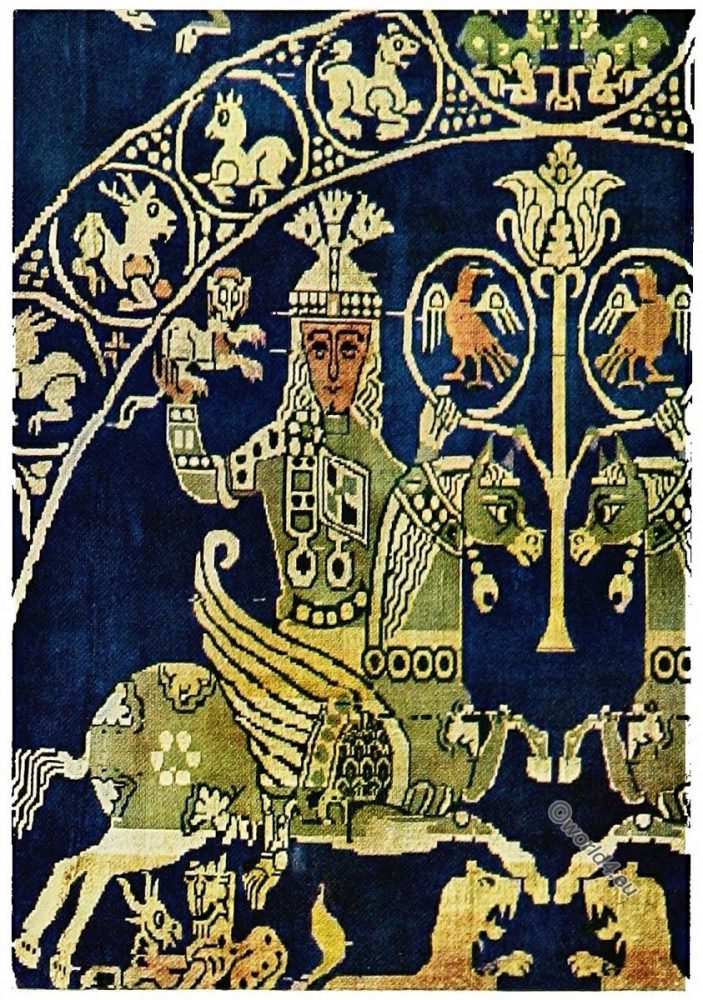 Besides the fabrics with tapestry patterns mentioned above there are examples of such with shuttle-woven patterns. They consist solely of wool. The patterns are repeated octagons filled with birds, animals, or hunting scenes of the period. Between the patterns formed by the octagons are bands formed by the unpatterned ground. This leads one to presume that these fabrics were employed as cushion covers and for upholstery purposes.

Till the birth of Christ silk was almost unknown in the Mediterranean countries. The Chinese, who date the commencement of their sericulture as far back as 2689 B. C., were successful in keeping the secret of this art. Silk and silk fabrics did not reach Syria and Egypt via Persia till the last centuries before Christ. A silk-weaving industry was established in the first century after Christ in many places in Asia Minor, Egypt and Greece, all of which were within the confines of the Roman Empire where Greek culture prevailed. Silk-weaving was introduced into Constantinople in the 4th century B. C., at which period it is also found in Italy.

Although there are small pieces of silk fabrics among the remains of the textiles from the tombs of Antinoe (Antinoupolis, Egypt), yet they appear to have distinctive patterns of their own. Some were employed as wraps for reliquiae, and as such found their way to the cathedrals of Sens and Aix-la-Chapelle. The patterns are semé , or they consist of grouped lozenges containing squares and rectangles, of circles with stars, crosses, hearts, crescents, palmettes and rosettes, as well as clover and vine leaves. Gradually the scroll motif interspersed with symmetrically placed animals, or human heads (with strange headgear) seen either en profile or en face begins to prevail. The chief animal figures are: lions, panthers, peacocks, dolphins, ducks, and horses, zebras, ibis and ostriches alternating with palm-leaves. In the 7th century A. D. the introduction of patterns with winged horses and ibexes points to Persian influence. 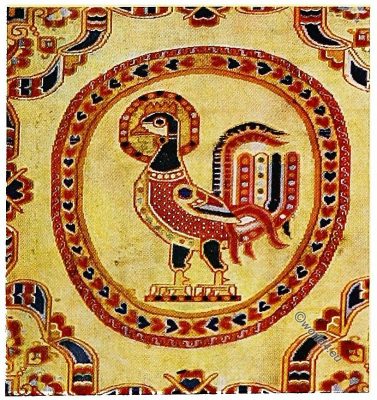 A small group of textiles with figure designs dates from the 5th century A. D. They depict scenes from the lives of Joseph and Orpheus which are explained by Greek inscriptions. Other pieces show Daniel in the Lions’ Den, or sea nymphs riding on dolphins surrounded by acanthus scrolls. 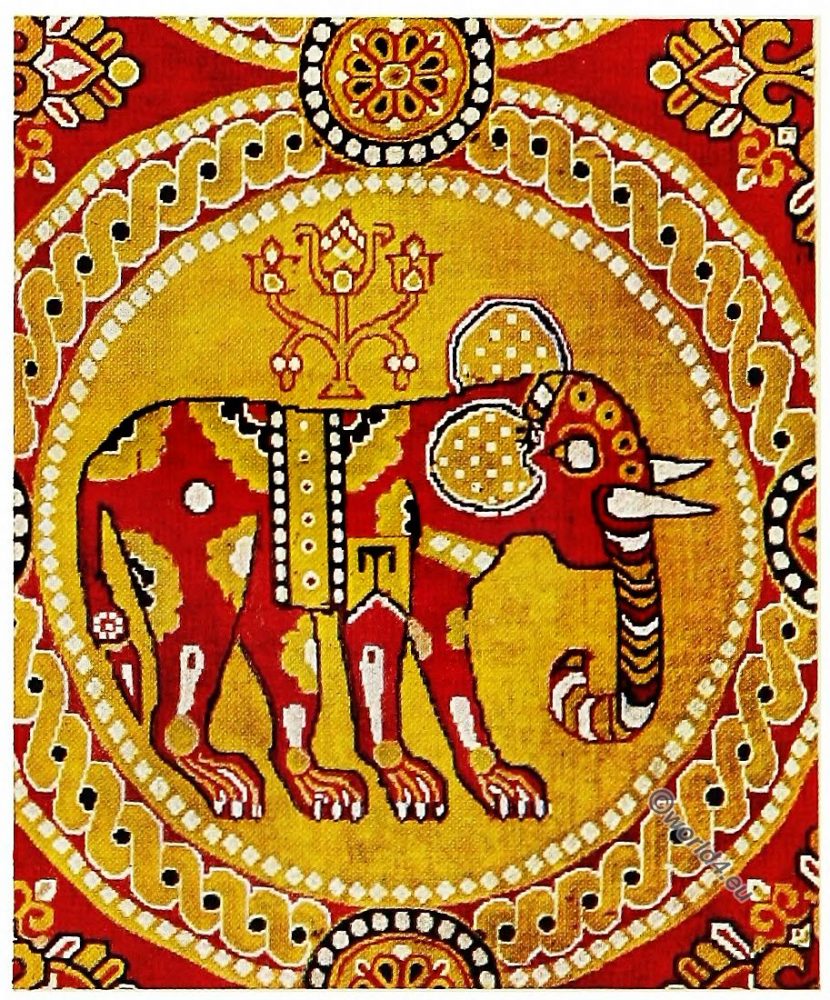 Beyond the silk fabrics found at Antinoe, large quantities were discovered in Panopolis. Both their colors and patterns indicate a common place of origin. These fabrics were woven into definite shapes such as clavi and other insertions for enrichment of robes and vestments. The names Zachariah and Joseph woven in Greek characters are said to be those of the Coptic weavers.

Alexandria was also renowned for its textile industries and supplied con. siderable quantities of the silks listed in the Liber Pontificalis even after the Arab occupation of the 8th and 9th centuries. These textiles are not only similar as to their patterns, but also in their rich and vivid colors. The white, yellow, brown, green, red, light or dark blue patterns, sometimes set in black contours, are on a cherry-colored ground. The most valuable and best preserved piece is the fabric removed from the Lateran Capella Sancta Sanctorum to the Vatican Museum. Its patterning consists of roundels framed in bands decorated with floral designs and containing scenes from the Annunciation and the Birth of Christ. 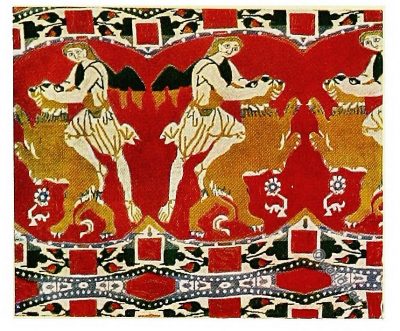 The floral design on the bands and in the intervals between the roundels is found with but few modifications on all the Alexandrian silks of this period. Some patterns consist of symmetrically placed riders or Amazons in antique costume either hunting or fighting, or quadrigae with charioteers, as well as men on foot fighting with animals. The fabrics with interwoven patterns of horsemen in the South Kensington Museum and in Maestricht, the fabrics with Amazons in Säkkingen, the Dioscuri fabrics in Maestricht, the Samson fabrics in London, as well as the quadrigae fabrics in the Brussels Museum are remarkably fine examples of weaving craft. The roundel pattern was first woven in Alexandria, and it was much later that it recurs in a simpler form in Persian textiles. From Persia it spread to East Asia.

During the rule of the Sassanians, who reigned in the Neo-Persian empire from 250-650 A. D., and who were distinguished for their love of luxury, the arts, especially that of weaving, attained to a high degree of achievement, partircularly in Ctesiphon, the capital. Sapor II. brought weavers from Mesopotamia to Susa and other cities as early as the 4th century. When, under Justinian II. silk weaving became a monopoly, and was limited to the imperial gynaecia, many weavers were forced to migrate from Tyre, Berytus and other cities to Persia. Thus the older Sassanian patterns, which were based on early Persian and Assyrian types, were enriched by Graeco- Roman motifs. A favorite pattern is that of princely hunters surrounded by wild animals. Griffins and other monsters are placed symmetrically on either side of the sacred tree in large roundels, squares, or between bands. It was possible to ascertain the origin of these textiles by the fact that they bore the same patterns as did the garments reproduced on the rock-tombs of the Sassanian princes in Takibostan.

According to Lessing, the so-called Yezdigerd fabric from St. Ursula in Cologne (named after Yezdigerd II., a grandson of Chosroes II.), which is patterned with kings riding on winged griffins surrounded by lions and ibexes, is certainly of Sassanian origin. Another hunting scene is framed in circles which again contain smaller ones with single animal designs. The large roundels are each linked up by small circles, of which those at the sides contain horsemen, and those at the top and bottom eagles and deer.

Other fabrics are patterned with groups of animals: lions or ostriches under trees, either side by side or one above the other. Several extant pieces of weaving prove that Perso-Sassanian fabrics must have found their way to China from where Persia imported her raw silk.

A later fabric (11th century) with sitting griffins and a frame composed of eight pairs of birds is certainly based on a Persian pattern, but contains so many Chinese elements in its details that it was probably woven in China. Another piece of weaving is undoubtedly based on Sassanian motifs, though it was woven in China in the 7th or 8th century, namely the fabric used as a banner by the Mikado Shomu representing Choroes II. hunting. He is recognizable by his peculiar headgear. The figures are set in a roundel composed of small circles. The Chinese origin is proven by the Chinese symbols on the flanks of the horses denoting «mountain» and «luck». This influencing of the Orient by the Occident may be traced till the beginning of the 14th century, when a contrary movement sets in and Chinese motifs are introduced into the west where, however, they are considerably modified.

Source: An Encyclopædia of Textiles: From the Earliest Times to the beginning of the 19th century by Ernst Flemming. Published by Ernst Wasmuth, Berlin c. 1912.