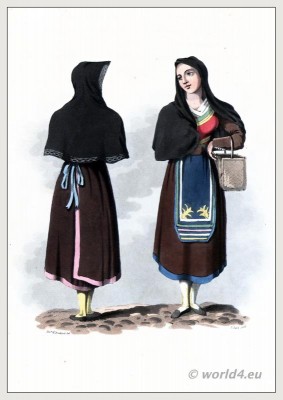 THE taste for gaudy colours, among women of the lower class, is less prevalent in Salamanca, than in most parts of the kingdom of Leon. The Servant Girls of this city, are generally habited in brown dresses, and black mantillas. A love of finery, however, is still displayed in party coloured belts, which are worn across the breast, and answer the purpose of neck-kerchiefs, and in the variegated borders of their aprons. The general character of this dress, is becoming; and the women of this class, as well as the Spanish ladies, are remarkable for their graceful gait and carnage.