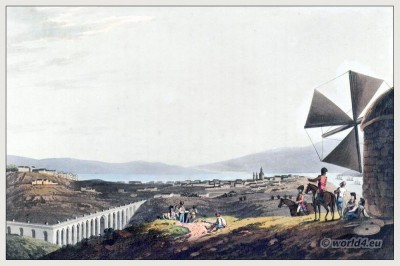 ENVIRONS OF LISBON, And Aqueduct of Alcântara.

ENVIRONS OF LISBON, And Aqueduct of Alcântara.

FROM Quellus, which is situated half-way between Cintra and Lisbon, a bridle road along the course of the aqueduct leads to the capital. To the right of this road is a lofty hill, whence this sketch was taken. It represents in the distance part of the city, the river, and the opposite bank, and towards the fore ground that portion of the aqueduct which stretches across the vale of Alcantara.

The country between Quellus and Lisbon is hilly, unenclosed, and destitute of trees. The soil, though apparently shallow and stony, produces good crops of corn, and is peculiarly favourable to the olive. Clusters of low windmills, with sails in the shape of a Maltese cross, are seen on most of the heights. About a mile to the eastward of the aqueduct, and agreeably situated in the Vale of Alcantara, is the town of Bemfica, consisting principally of villas which belong to the nobility and merchants of Lisbon.

” Lisbon is built upon hills, but of no great height, the soil “round the city consists of limestone and basalt, the former
” lying at the top, being in many places very white, close, and ” good for building; but in one part, beneath the other strata,
” and at a depth in both hanks of the Tagus, it is composed
” solely of one heap of petrifactions.” Wilson’s History of Mountains, vol. ii, page 164.