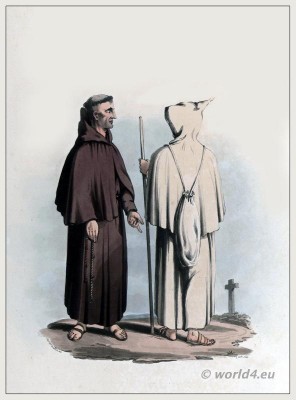 THE Franciscan order, founded in the year 1209, was marked by the severity of its discipline. The extravagant appearance of devotion assumed by the members of this order, seemed to be the result of a disordered imagination, rather than that of any sober religious impression.

It is supposed that the representatives of the Papal see considered the character of this institution as favourable to the views of the church, and accordingly bestowed upon it many privileges and indulgences, which raised it into consideration and importance.

After a series of time the members of a more rigid cast were offended at many of the alterations which had been made from the original rules and discipline of the society; and particularly from that of poverty in the individual and body corporate; which was a distinguishing feature of their tenets, and positively enjoined by their vow. These objections led to numerous schisms which were carried to an alarming extent. An accomodation was at length effected amongst the various parties, and it was agreed that they should all be considered as belonging to the same body, but that there should be two classes, the one more, and the other less rigid.

The Franciscans are also denominated Minor Friars, and Grey Friars. The Capuchins and Recollects are orders which have emanated from this society.