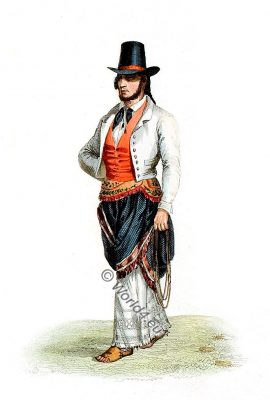 Typical outfit of the Argentinean gaucho are boots made of foal leather and spurs made of silver or iron. In addition, there are the pump pants (bombachas), sombrero or cap (boina) and scarf; the gaucho knife (facón) is attached to the belt.

The red poncho salteño, which imitates the flag of the province of Salta with its black stripes and is also widely used in folklore, is well known. While a simple poncho mainly serves as protection against wind and weather, there are also higher quality works made of fine fabrics, which are primarily used for decorative purposes.

Gauchos work not only in Estancias of the Pampa, but also in the Argentine Mesopotamia and in the north-east of the country. There they are equipped with white socks, the Chiripá (a kind of trouser skirt), sombrero and poncho.

Estancia (Spanish/Portuguese) or Estanzia, in Brazil also called Fazenda, is a country estate in South America on which a stationary, extensive pasture farming – above all with fattening cattle, sheep and dairy cows – is operated.

In Argentina, Chile, Paraguay, Uruguay and the southernmost part of Brazil, the term “Estancia” (literally “homestead”) was established from the first half of the 19th century onwards to refer to farms where local animal husbandry was practiced, which meant the simple capture and slaughter of cattle imported from Europe by the Spaniards and feralized in the pampas.

Originally, however, the Estancia did not refer to the estate, but to the grassland section serving as pasture for the animals.

Around 1600, the gaudérios or changadores appeared in the north and northwest of Argentina – probably the first gauchos. Gaudérios were farm workers from the Brazilian Rio Grande do Sul on their travels.

The word gaudério was used to refer to the Río de la Plata and was used to describe the country’s own agricultural workers. According to another hypothesis, gauchos were descended from Spanish descendants, mestizos or Indians, but also from descendants of European immigrants, blacks or mulattoes who adopted the gauchos’ lifestyle.