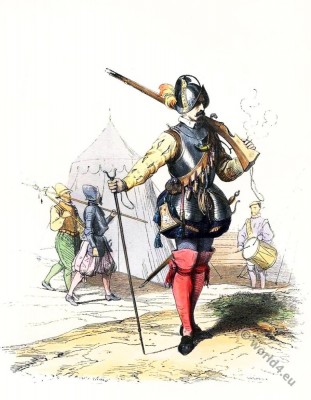 With Arkebuse a diverse family of muzzle loaders of the 15th and 16th centuries is called. These can be found in Europe and Asia with matchlock and a caliber of about 18 to 20 millimeters. From the early 16th century harquebusiers significantly handier arquebuses were developed. They were the shorter and lighter twins of muskets – that were so heavy that they always required a support fork – and could also be used by horsemen; thus enabling for the first cavalry shooters and therefore represent the forerunner of the carabiner is. During the 16th century, lighter models have been developed in France, which were designated in Germany as arquebuses. They therefore were suitable for the cavalry, which the troops of the genus harquebusier originated. The accuracy of both the harquebusiers and the arquebuses (and the muskets) was relatively low, so that their use was useful only over short distances or focused as a battery. In the late 16th century, the Musketeers were the heavy infantry, while the arquebusiers were the light infantry. 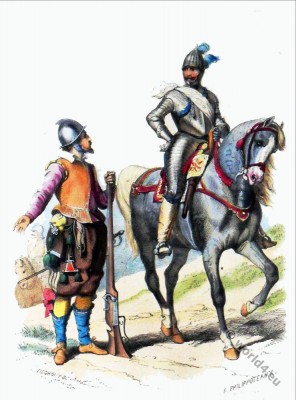 Meyrick, in the valuable paper on Hand Fire-arms contributed to the ‘Archaologia,’ vol. xxii., has given us considerable information respecting this improvement of the hand-gun. Philippe de Commines, he tells us, is the first author who brings to our notice the arquebus. In his account of the battle of Morat, fought on the 22nd of June, 1476, he enumerates in the confederate army ten thousand arquebusiers, and in the same year he speaks of M. de Beures, of the house of Croy, who commanded the arquebusiers in the town of Nancy. In the commentary of Francis Carpenzi on Philippe de Commines, we read, “He led the first line himself with six hundred light-armed horse, as many with hand-guns, and the same number of arquebusiers, a name certainly new, nor as yet, that I know, given in Latin.”

In England, on the first foundation of the yeomen guard* in 1485, one-half were armed with bows and the other with arquebuses. When the hand-gun received a contrivance suggested by the trigger of the cross-bow, to convey with certainty and instantaneous motion the burning match to the pan, it acquired the appellation of arquebus, corrupted into harquebus. Fauchet, who wrote his ‘Livre d’Origine des Armes’ in the time of Henry II. of France, informs us that it was so called from the Italian arca-bouza, corrupted from bocca, and signified a bow with a mouth; and the resemblance of its stock to that of the cross-bow may be seen in Skelton’s Specimens before adverted to. To the Italians, therefore, we must assign the invention of the trigger, as well as the original invention of the hand-cannon. The Latin name for the hand-gun was tormentum manuarium, those of this weapon sclopus and arcus-busus, since which “buss” has invariably signified a gun.* Previous to the new invention, the match had been held in the hand in using the hand-gun as well as the hand-cannon. The match-lock was now added and distinguished the arquebus. In its early form, judging from old prints, it seems to have been merely a piece of iron in the form of the letter S reversed, and made to turn on a pivot in its centre, whence it was called a “serpentine.” The upper part was slit to hold the match, and was brought down upon the pan by the lower being pushed up by the hand, when it was intended to ignite the powder. In this simple state it seems to have remained till towards the middle of the sixteenth century, when the lower part of the S was got rid of, and a trigger, in the situation and form of that still used, substituted instead.

M. Demmin ignores altogether the derivation of arquebus from arca-bouza, and says it was so called from the German word “Hack-Buss” (germ. Hakenbüchse, Harquebus. Both names refer to an iron hook under the barrel of early arquebuses. With this the firearm on a support such as a wall or a tree branch was fixed (hooked) in order to trap the enormous recoil. The terms Harquebus and Arquebus partly specifically  are sometimes used interchangeably. Harquebus for older, bulkier models Arkebuse for more modern, more manageable types.), or “cannon with catch.” It is singular that he should not have noticed the passage in Fauchet, who, dedicating his book to Henry III. of France, 1584, must have lived sufficiently near the time of the invention of the harquebus to be an authority on the subject, and more particularly as the words of the worthy president rather support than contradict his opinion. “Çet instrument,” he says, speaking of the hand-cannon, “s’appela depuis haquebute, et maintenant a pris le nom de harquebuze que ceux qui pensent le nom était italien luy ont donna; comme qui dirait arc-à-trou, que les Italiens appellent booze.” He does not, therefore, corroborate the latter assertion, while he decidedly states that the earlier name of the “instrument” was haquebute, under which we continually find mention of it in England: “Guilt harquebuts (in store) 397.” “Harquebutt complete viis.” (‘ urvey of Tower of London’ 1559.)

*The Yeomen of the Guard.

The Yeomen of the Guard are the oldest existing bodyguard of the British king. They were founded in 1485 by Henry VII. before the Battle of Bosworth Field, and fought in the following centuries always as bodyguards. The uniform of the Yeomen of the Guard dates from the Tudor period in which the troupe was founded.

From the book: A cyclopedia of costume, or, dictionary of dress, including notices of contemporaneous fashions on the continent; a general chronological history of the costumes of the principal countries of Europe, from the commencement of the Christian era to the accession of George the Third by James Robinson Planch, 1796-1880.