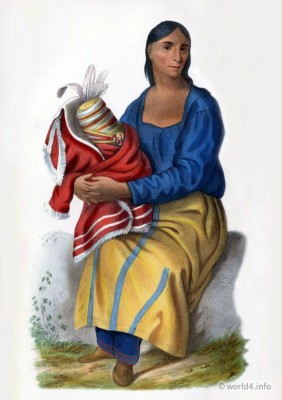 THIS picture, which we copy from Colonel McKenney’s Tour through the North-Western Lakes, is not the portrait of any individual, but is intended to represent a singular custom which prevails among the Chippeway Indians, and we insert it to give variety to our pages.

A Chippeway widow, on the death of her husband, selects from his scanty wardrobe, a complete suit of his best clothes, which she makes up into a bundle. This is placed near her while at work, and is carried wherever she goes. She calls it her husband, treats it with the respect which would be due to a living lord and master, and would be considered as disgracing herself and treating his memory with disrespect, if she was to part with it even for a moment.
The custom is a beautiful and affecting one, which, had it prevailed in the days of the Greeks or Romans, would have been immortalized by the poet and historian, and been often quoted and referred to as a graceful instance of the classic taste of the ancients.
It is the more remarkable as occurring in the most inhospitable region of our country, where the inclemency of the climate and the sterile nature of the soil impose upon the inhabitants the necessity of constant exertion to procure a scanty subsistence. This state of penury falls especially hard upon the women, who are doomed to continual labor. From a class so wretchedly poor, and so severely tasked, we should scarcely expect the exhibition of so refined a sentiment as is indicated by the custom we have described; nor is it less remarkable, that the wretched inhabitants of a frozen region should encumber their toils by an addition which must often be burdensome and inconvenient. But what will not woman do what does she not do, in every clime, in compliance with the laws of fashion, or in obedience to the dictates of the heart.
The Chippeway widow carries her ” husband” during the season of mourning, which is one year, and during that time cannot marry without gross impropriety. If she does not marry at the close of the year, she usually continues to carry the badge of her widow hood until she is relieved of it by the nearest relatives of her de ceased husband, who may at any time, when they conceive she has mourned long enough, call upon her, and take away the bundle, after which she is at liberty to contract a second marriage.