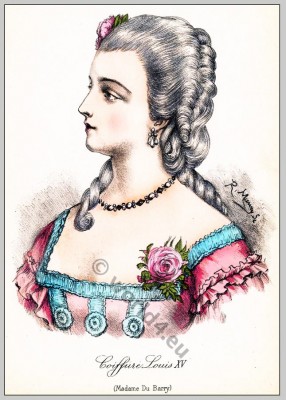 Mistress of the French King Louis XV. Marie-Jeanne Bécu came from a poor family. She was the illegitimate daughter of a seamstress Anne Bécu and the Franciscan Jean Baptiste Casimir Gomard de Vaubernier. Under the name of Mademoiselle Lange, she worked in the establishment of Madame Gourdan. There she noticed to Count Jean-Baptiste du Barry on. By marrying his brother Guillaume du Barry they tried to hide their origins. This was planned by Count Jean-Baptiste du Barry, who intended to convey the 18-year-old as the aging king’s mistress, to increase its own influence in the court. 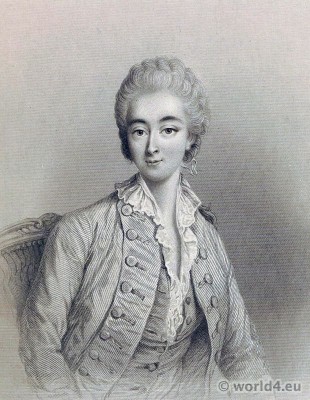 The influence of Madame du Barry at the court of France was limited more or less to personal intrigue. On his deathbed, the king ordered in 1774 to ban them in a monastery, although Madame du Barry had until recently kept him sacrificing. The Countess was brought to the Abbey Pont-aux-Dames in Couilly, where she lived more than a year before she was allowed to move in October 1775 in her home in Saint-Vrain (Essonne). 1776, they returned to royal command again to her palace Louveciennes (Château de Madame du Barry) at Versailles back. After the outbreak of the French Revolution was robbed her castle in January 1791. Marie-Jeanne du Barry was on 8 December 1793 on the Place de la Révolution executed by the guillotine. In contrast to Louis XVI. and Marie Antoinette her execution was unusually humiliating. Many artists were inspired by the life of Madame du Barry and immortalized them in her novels, paintings, films and music. 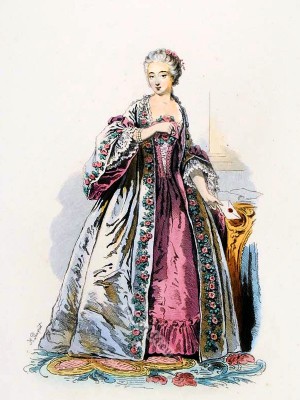 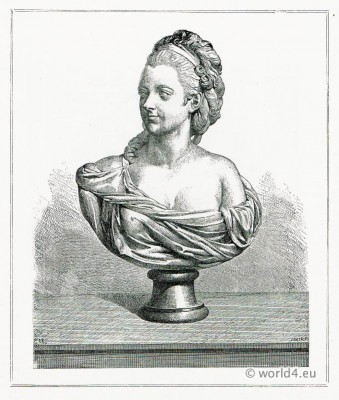 Every one knows madame Du Barry`s history, but every few are acquaunted with her bust sculpted by Pajou. Before executing in marple the bust to be seen in the Louvre, this artist modelled one in terra cota, and exposed it at the Exhibition of the Fine arts, in 1771. It is this very bust wich we have drwan and engraved. It is one of infinite delicacy, sprightly and pleasant to the eye. At the sight of it, one feels that its likeness is perfect, and is rather tempted to excuse the infatuation of old king Lous XV.
The sculptors of the XVIIIth. century, wanding in real grandness, were not, at least, deficient in intelligence. They promptly perceived how much the clay was ready to give a shape to their wildest fancies; and nearly every one of them has left nice busts nicely execudet. This one of the most remarkable, and one that gives a sufficient explanation of the strange fortune of the lively model.