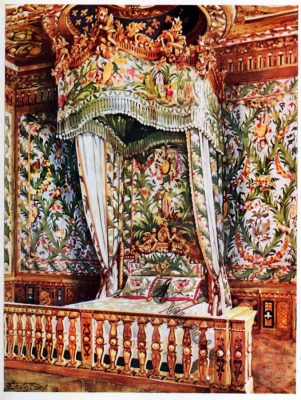 “The moss his bed; his cave, the humble cell.” — The Hermit.

OF all the examples extant of the towering upholstered bedsteads – which, that they might not appear dwarfed by the height of the apartments, at times exceeded 18 feet in altitude – this gorgeous lit de parade of Marie Antoinette is probably the gayest.

As the present-day colorings of the Lyonnais tapestry hangings can be but faded reminiscences of the original tones, its antithesis is equally striking to both the simple bed of nature in Parnell’s Hermit, and the sad couch of black velvet embroidered with pearls, used by that grim predecessor of Marie Antoinette, Catherine de Médicis.

In addition to the instances already given – whilst treating of the pre-eminence of the French in the furniture of repose-of the wealth expended upon beds de luxe, it may be recorded that a summer bedstead of Queen Marie Antoinette’s was valued at 131.820 livres (about 400,000 €).

We are told also that at the marriage of a princess of France, £25,000 was regarded as a reasonable sum to spend upon the laces of the linens and bedspreads.

The Chambre des Reines in which Queen Marie Antoinette΄s bed stands was used by four Maries who almost successively occupied the French throne, Marie de Médicis, Marie Thérèse, Marie Antoinette, and the Empress Marie Louise. The present balustrade or barrière separating the bed of Empire detail, is no doubt that provided for the last-named queen.

Both in France and England, ladies of the bed-chamber were appointed in the seventeenth century, in place of grooms or valets, who had been placed inside the balustrade in order to protect the bed. Probably no ladies of the bed-chamber would have sufficed to dislodge the cherry-seller who took possession of the lit de parade at the Tuileries (when the king and queen vacated that place in their flight of 1791 to Versailles), announcing, as she sat thereon and sold her fruit: “To-day it is the nation’s turn to be comfortable.” Was this, one wonders, the same Tuileries bed from which one morning Marie Antoinette arose, and, in response to her attendants’ compliments on her good looks, removed her nightcap and revealed her hair, turned quite white in a single night.

The counterpane provided for “the Austrian’s” use during her imprisonment in the Temple, preserved in the Musée Carnavalet, would make but a sorry covering to this piece of mobiliary pomp.

The final furniture of Queen Marie Antoinette is entered in the burial register of the Madeleine thus: “For the coffin of the Widow Capet, seven francs.”

Source: The book of decorative furniture, its form, color and history by Edwin Foley, 1910.