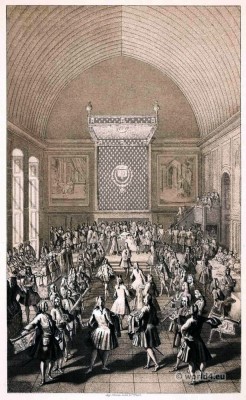 The Coronation Banquet of Louis XV at Reims.

The Coronation Banquet of Louis XV at Reims.

At the end of the room, upon a raised platform and beneath a dais studded with fleur-de-lis and the arms of France and Navarre, is the king’s table, around which stand the great officers of state.
In the comer of the room, upon a platform to the king’s left, are the royal princesses.
At the foot of the platform are four separate tables, two on each side.
To the right are the six spiritual peers with their copes and mitres; upon the other side of the table are the Bishops of Soissons, Amiens, and Senlis, suffragans of the archbishopric of Rheims, in their hoods and rochets.
To the left, the six temporal peers.
The second table, beside that of the spiritual peers, is the ambasador’s table,
The second table, next to that of the temporal peers, is the table of the great officers of state and of the Knights of the order of the Holy Ghost.
The persons standing around these four tables are the officers of the royal bodyguard of Rheims, who have the right of waiting at the royal banquet.
In the centre, at the foot of the steps leading to the platform, is the Marquis de Livry, first maître d’hôtel, with his wand of office; beside him are the twelve maîtres d’hôtel, standing in a row, six on each side; next to them are the heralds, drummers, trumpeter, and hautboy players, also standing in a row,
The grand-master of the ceremonies is to the right, and the master of the ceremonies to the left; the gentlemen and officers appointed to wait at the royal table are the figures in the centre of the picture just in front of the platform.
This plate and the accompanying text are from the Sacre de Louis XV., a splendid compilation executed by the first engravers in Europe under the supervision of M. d’Ullin,