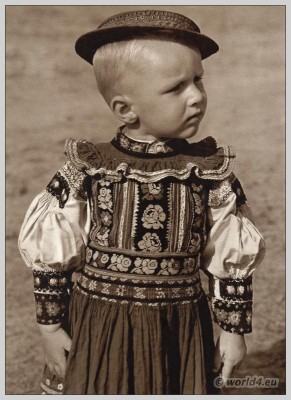 Dobra Niva, in German called Döbring or Dobrone in Hungarian, is a village in central Slovakia. It lies on the River Neresnica between the mountains and Selmec Javorie Mountains, 13 km south of Zvolen. The first written mention was made in 1254 as Dobrum.

Enclosed is a film about the local carnival in the year of 2011 by Ján Cuth. The film shows not only imaginative costumes of the local residents, it is characterized by a very subtle and unobtrusive camera work. A pearl in the big web swamp.
The boy in the picture is perhaps even present in the room.

Dobrá Niva – Maškarný ples 15. 1. 2011
The festival derives with a waltz and this scene alone, the great hall, the lighting, the decoration and then the first dancers, reminiscent of great cinema in the style of David Lynch. One would have liked to seen the end of the festival.