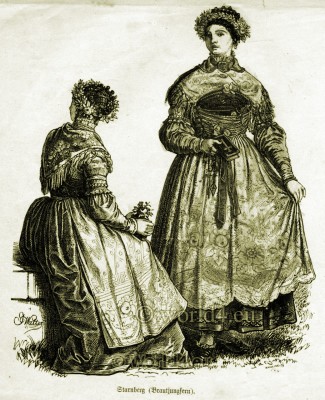 Two women in traditional costume (Dirndl) of Starnberg, Bavaria, Germany. Starnberg gained notoriety through the death of the Bavarian King Ludwig II, also known as fairy king, who was found death on the edge of the lake.
When the clothes of the two women is the festive attire as part of a wedding. They are as bridesmaids decorated. The aprons are embroidered intricately and elaborately. Over the shoulders is a precious scarf with fringe. Furthermore they wear a collar.