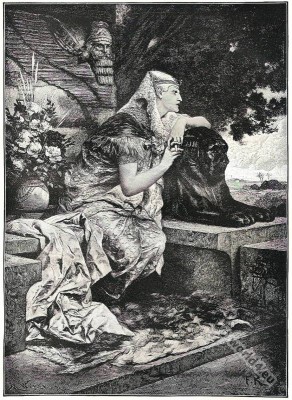 SO she raised her hands to the great and glorious sun, who with his golden, sword-like rays was just dispersing the mists that hung over the Euphrates, and opened her lips to sing her newly-learned hymns in praise of Mithras; but her voice failed her-instead of Mithras she could only see her own great Ra, the god she had so often worshipped in Egypt, and instead of a Magian hymn could only sing the one with which the Egyptian priests are accustomed to greet the rising sun.
“As she gazed on the young light, the rays of which were not yet strong enough to dazzle her, she thought of her childhood, and the tears gathered in her eyes. Then she looked down over the broad plain. There was the Euphrates with bis yellow waves looking so like the Nile-“

Georg Moritz Ebers (1837-1898) was a German Egyptologist and author. Georg Ebers came from the Berlin Jewish haute bourgeoisie. Both parents were converted to Christianity. With his historical novels and popular science books, he contributed to the great popularity of Egyptology in the late 19th century. Starting with an Egyptian princess (1864) wrote Ebers numerous historical novels which aroused great interest of readers. In addition to Felix Dahn, he is considered the leading exponent of “Professor novel”. The themes of the novels he chose in part from the environment of his scientific work, so of Egyptian history, but also from other periods (Middle Ages).

Rhodopis (from Greek, means “rosy appearance of”) is the name of a courtesan mentioned by Herodotus in Egypt for the first half of the 6th century. BC. According to Herodotus every Greek knew the history of the Rhodopis. Her legendary beauty was even in ancient times a myth. With her name an ancient fable is connected, the motif recalls the tale of Cinderella. Written handed down by the Greek historian Strabo in the 1st century BC., it may be the oldest version of the Cinderella motif. The motif of the lost shoe and the related search for the lost bride by means of a shoe reappears in later centuries in many folk tales. Thus, according to the Greeks and Romans as well as in Persia, China, and most recently in the fairy tale of Cinderella.

Also: Rhod’ope (3 syL), or Rhod’opis, a celebrated Greek courtesan, who afterwards married Psammetichus, king of Egypt. It is said she built the third pyramid.— Pliny, Nat. Hist, xxxvi. 12.
A statelier pyramis to her I`ll rear,
Than Rhodope’s.
Shakespeare, Henry VI. act i. sc. 6 (1589).