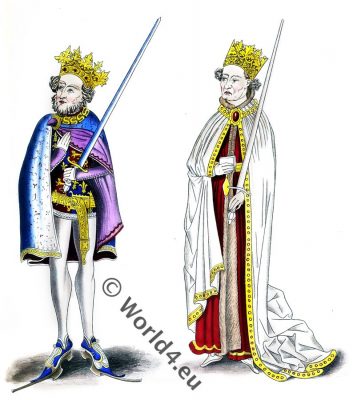 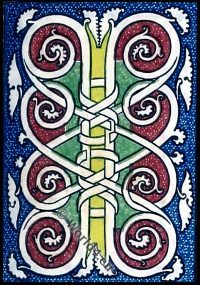 IN one of the Cottonian manuscripts (Julius, E. IV.), a brief metrical chronicle of the kings of England, which has been attributed to John Lidgate (1), and which was composed soon after the 10th Hen. VI., is illustrated by a series of singular and bold drawings of the monarchs whose reigns it commemorates. Two of these figures are given on the accompanying plate, which were intended to represent Henry the First and King John. The costume of King John is rather remarkable, particularly the high clogs which he has on his feet.

The poem which these figures illustrate is curious, and appears to have been very popular, by the numerous copies which are found in manuscripts of the fifteenth century. It was printed by Thomas Hearne, in the appendix to his edition of Robert of Gloucester.(2) An extract or two from the descriptions of the reigns of the two kings, whose figures are here given, will convey to the general reader an idea of its style and character. Of King Henry, the writer tells us,-

“He made statute, with gode rede,
That thevis thrugh hangynge schuld be dede.
Anothir he made anon right,
That money makers schuld lese hir sight.”

The characteristics of John’s reign were the interdict and the civil war:- 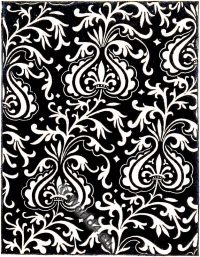 The elegant reading desk at the end of the present article, was, about the year 1750, dragged out of the deep part of the lake at Newstead, and is now preserved in the collegiate church at Southwell in Nottinghamshire, having been purchased by Sir Richard Kaye, in 1778, and presented by his widow to the chapter. It is made of brass, and was sent by them to a clockmaker to be cleaned, who observed that it was composed of several pieces, which might be taken apart. On unscrewing these, the boss was found to contain a number of parchments, most of which were deeds and grants connected with the abbey of Newstead.

Among the rest, was a pardon granted by King Henry V. on some occasion to the monks, and, as was common with such documents, worded so generally as to include every kind of offence that it was probable that the monks might be accused of having committed, previous to the date at which the pardon was granted. Such deeds were often necessary to protect the monks against the rapacity or malice of their neighbours.

Washington Irving, who has described this reading desk in his little volume on “Abbotsford and Newstead Abbey,” has entirely misunderstood the nature of this document, and represents it as an indulgence to the monks to commit crimes with impunity. There can be little doubt that this desk, which was used in the chapel of the abbey to read the Litany from, was thrown into the lake by the monks, probably at the time when the dissolution of monasteries was first threatened, in the hope that by this means their titles would be preserved until the storm should be blown over; and they never returning to recover it, it had remained beneath the water during more than two centuries. 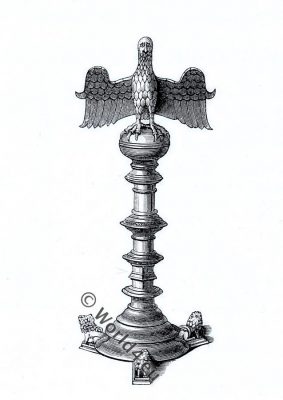 The initial letter on the preceding page is taken from a copy of Jenson’s Edition of Pliny, 1476, in the possession of Mr. Pickering. The specimen of arras is from a MS. in the British Museum, Harl. 4380.