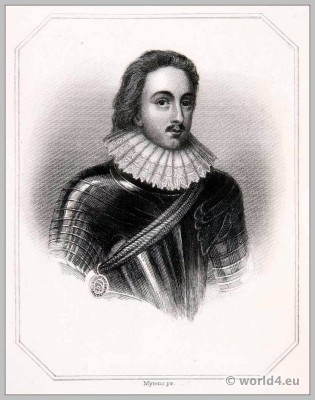 Henry Frederick Stuart, Prince of Wales (1594-1612) was the eldest son of King James I and Anne of Denmark. He was born in Stirling Castle and named at his birth on Duke of Rothesay, Earl of Carrick and Lord of the Isles. After his father had also mounted the English throne in 1603, he was appointed Duke of Cornwall, in 1610 the Prince of Wales and Earl of Chester (these two titles are from the 14th century traditionally the inheritance contenders to the English and the Scottish throne reserved).

Henry was the great hope not only of his parents, his death at the age of only 18 years was considered a disaster for the nation. Henry was buried in Westminster Abbey.