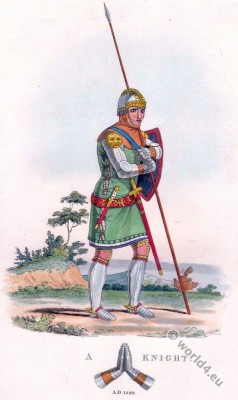 English knight in armor, lance and sword in the year 1325.

Reign of of King Edward II. and his son Edward III. (1312 – 1377). Edward came from the dynasty of Anjou-Plantagenet, was from 1327 to 1377 King of England and Wales and is considered one of the most important English rulers of the Middle Ages. Edward III. was the last English king whose native language was French. 1362 was officially English instead of French previously used official language.