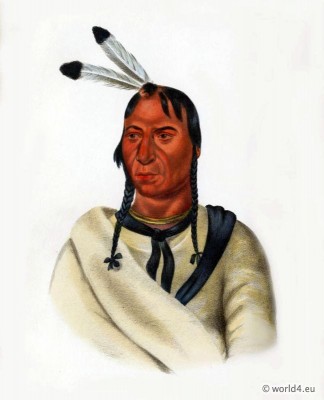 WE have but little to say of this individual, whose name, when translated, signifies Sleepy eyes, and is expressive of the character of his countenance. He is one of the hereditary chiefs of the Teton tribe, of the Dacotah nation. In person, he is large, and well pro portioned, and has rather a dignified appearance. He is a goodnatured, plausible person, but has never been distinguished either in war or as a hunter.
The word Teton means boaster, and has been given to this tribe in consequence of the habit of bragging, which is said to prevail among them. They dwell in skin lodges, which are easily removed, and are constantly roving over the vast plains between the St. Peter and the Missouri. They trade on both rivers, and are very hostile to white men, whom they insult and rob, when they find them on the prairies, where such acts may be safely perpetrated. But all the tribes who live in contact with our frontier, have become so conscious of the power of the American government, as to be cautious in their depredations upon our citizens; and acts of violence are growing every day less numerous upon our borders. The Tetons are fierce, rapacious, and untameable; but are not considered braver than the other Sioux tribes.