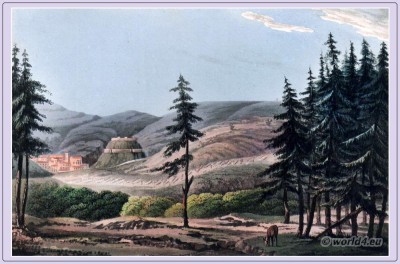 TORRES VEDRAS. From the West.

TORRES VEDRAS. From the West.

ON the 29th, the head quarters of the army were removed to Torres Vedras, a city of great antiquity, and the chief of a corregidoria. Of the period of its foundation no authentic records are preserved.

A fortress of considerable extent on a hill, overhanging the town, marks it as having been a place of no little importance during the time of the Moors; but some vestiges of Roman workmanship which appear among its ruins establish its claim to an origin of higher antiquity.
The eminence on which this fortress has been constructed is a singular feature in the landscape. Unconnected with any other height, it presents the appearance of an artificial mound, raised above the plain for the purpose of defence.

In a military point of view it is now a position of little importance, being wholly commanded by a range of hills, which environ the town, and adjacent plain. The town consists of nearly two thousand houses, three convents and seven churches, built of a very fine stone, remarkable for its whiteness. The plain and sides of the surrounding heights, are fertile and productive in corn and wine. To the north-westward of the town is a handsome aqueduct, and near it runs the little river Sizandre.