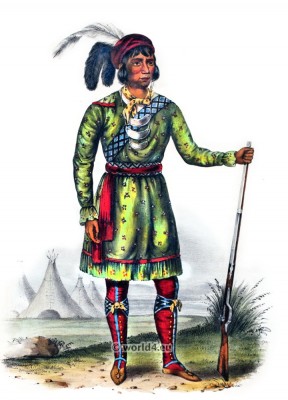 The story of Osceola, a Seminole Indian, may not be well known. Some say that Osceola (named Billy Powell at birth) was born in 1804 at Chatteehootchee River in Georgia and came to secret ways with his Indian mother to Florida. He is said to have been a half-blood because his father was a Scotchman, and his mother was a Creek woman. In reality, he was the son of a Creek chief who was killed in a 1808 battle with U.S. troops. In the Creek language, the name “Osceola” meant = Rising Sun. In his new home in Florida many Creeks and runaway black slaves were very warmly received by the Seminoles. Because of his powerful voice as a boy he was Asseola, Asseholar, As-se-se-ha-ho-lar, Asi yaholo or Osceola = called “strong voice” or “Loud Voice”. When his enemies his name “Powell” was.
Osceola was chief and supreme leader of the Seminoles to 30 Januar 1838. As a young man he signed the 1832 peace treaty with the United States. 1834 just wanted to force the Seminoles to relocate to the Indian Territory Oklahoma this government. The council Osceola demanded that the rejection of the Treaty and called on his people to resist the Americans. Osceola Seminoles gained more and more around who did not hear the warnings of their paramount chief Mickenopah. As general AR Thompson the prestigious chief Emathla – who was held by the whites against the Seminoles as a hostage – let kill and must resettle the former Negro slaves instead of as slaves to be sold, was in the council – who led the head chief Mickenopah – unanimously the war against the U.S. decided. They took this decision after the family into hiding in the swamps of Florida and the Supreme War Chief Osceola began a 7 year war against U.S. troops. 1835 Major Dade was ambushed in a surprise attack and killed about 100 soldiers. In subsequent years, seven generals were beaten and more than 1,400 officers and soldiers lost their lives.
The U.S. troops were in the marsh with no chance against the Seminoles and several times entire departments were wiped out. Even bloodhounds who were rushed to the Seminoles could be led astray. Time and again, when the soldiers pursued the warriors sent back to this subject, were attacked by the Seminole settlements of whites in hindsight. Than the army failed to defeat the Seminoles in a decisive battle or not to deport the proposed reservation in Oklahoma, invited General Jesup in consultation with the Ministry of War in 1837 Osceola under safe conduct to peace negotiations. Despite the truce white Osceola was struck by order of General and shackled in chains locked in the prison of Fort Mellon in Florida, but later moved for security reasons to Fort Moultrie in South Carolina. Here 250 Seminoles were already detained them under the head chief Mickenopah. In January of 1838 Osceola sank into melancholy from which he could not free himself and died on 30 January of the same year. The War of the Seminoles despite the death of their chief went on, they even increased their resistance yet. The sneaky betrayal was justified by the U.S. government in the direction the Indians were savages and only one has made war against them.
Osceola was buried with military honors and stand on his grave stone still the words: Osceola, patriot and warrior, died on 30 Januar 1838. In the United States today carry 18 cities and three counties the name of the Seminole chief.

Only in 1842, the government recognized that the war was futile and had set all the fighting. In August 1842, the Seminole chiefs were ready to go to the Indian Territory in Oklahoma.