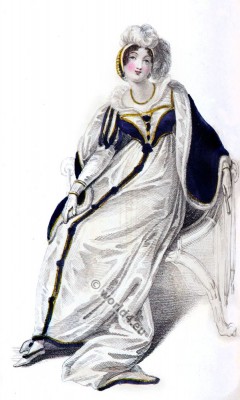 WHlTE’ satin dress, with purple body, and long sleeves slashed at the top; bows of purple ribbon down the front. Mantle of purple, lined with white silk, bordered with gold, and edged with swansdown. Gold net cap with white feathers. White shoes, gloves, and fan. Necklace, ear-rings, and other ornaments, of gold.

Red cloaks are at length completely abandoned, and we congratulate our lovely readers on their emancipation from the most despotic dress that ever was introduced by the whimsical and arbitrary goddess of fashion.

The writer of this article predicted, on their first appearance, that a color so disadvantageous to beauty, could never become prevalent. “Let them;” said he, “enwrap themselves with all immense blaze of red, it will come to nothing at last.” And so it has turned out: our promenades presented us with an assemblage of pallid and ghastly spectres, who, though “forbidden to tell the secrets of their prison house,” carried about with them the visible signs of torture, and appeared literally robed in flame.

Pea-green is a colour generally introduced in spring, for what reason we know not, except it be intended to harmonize with the verdure with which, at this season, all nature is beginning to be clothed, though some may doubt whether a notion of harmony ever entered the inventive brain of a fashionable dress-maker.

However this may be, we must enter our decided protest against it; and we entreat our fair readers not to adopt a color so directly in opposition to good taste, and in which no face or form, be il majestic as Juno, or beautiful as Hebe, can ever appear with advantage and effect, Lilac, purple, all the varieties of blue, with the still greater varieties of grey, are open to their choice. If green must be selected, let it be the deep and rich hue of the Spanish fly, rather than that worst and vilest of all colours, pea-green.