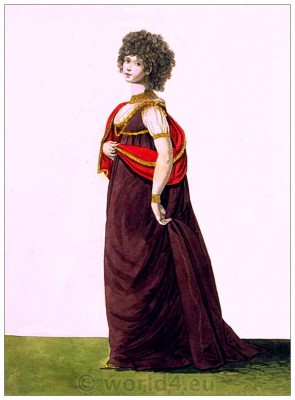 Dress in the Roman Style, February 1796

New Dress in the Roman Style,

introduced at the Opera by a foreign Lady of distinction, February 1796.

The hair dressed, without powder, into a variety of natural curls; two bands of gold in the hair. Body and petticoat of puce-colored satin; the body richly embroidered and clasped together over the shoulders. Very short sleeves of fine cambric, the end embroidered in gold. Roman mantle of scarlet kerseymere richly embroidered, all round, in gold, and one end fastened on the right shoulder. Large gold ear-rings and bracelets. Broad fancy festoon gold chain round the neck. White satin sandals laced with a gold cord.