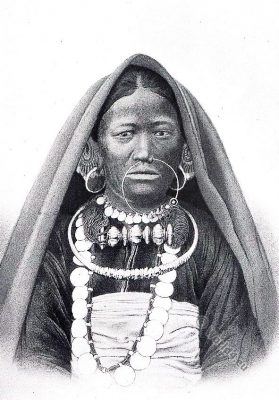 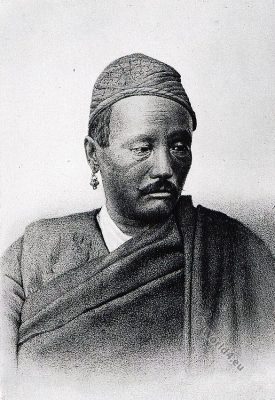 The very respectable-looking gentleman here represented and the richly bedizened old lady belong, I presume, to the upper class of Limbu society. The Limbus or Kirantis are represented by Mr. Hodgson and others as approximating in appearance to the darker Turanian race in colour and feature, but the old lady is apparently of light complexion, and has a very Mongolian type of face.

Note. The use of Kiranti as a synonym for Limbu is not strictly correct. The Limbu tribe is only one member of the Kiranti group, which includes also the Khambu (Rai or Rai Jimdar) and the Yakha. The term Turanian is now obsolete as a race designation.

Source: The people of India: being an attempt to trace the progress of the national mind in its various aspects, as reflected in the nation’s literature from the earliest times to the present day; with copious extracts from the best writers by Herbert H. Risley. Published by William Crooke. Calcutta 1915