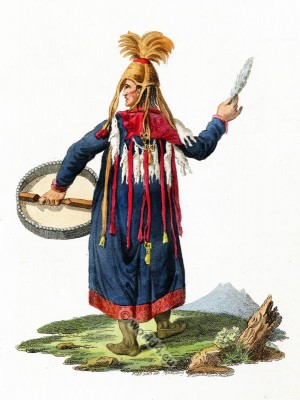 Back Figure of a Female Schaman, or Sorceress of Krasnajarsk.

Back Figure of a Female Shaman, or Sorceress of Krasnajarsk.

Front of the costume

THE Shamans are distinguished by a singular dress, made, generally, of tanned hide; their stockings, which serve them, at the same time, for boots, are also of skin: their garments are covered with a number of idols made out of plates of iron, with small bells, rings, eagles claws, the skins of serpents stuffed, narrow strips of fur, &c. Their caps are sometimes in the form of hoods, and sometimes like helmets; they are decorated with the feathers of the owl, and hung round with stuffed serpents. That this dress may have a greater effect, they seldom wear it but for the purpose of performing their impostures. For the scene of their magical operations, they generally select a subterranean hut, in which no light is admitted but what is derived from the gloomy reflection of their fires. In this state, approaching to darkness, it may easily be conceived that their appearance is frightful: they throw them-selves into violent agitations, and, at every motion of their bodies, the noise of the plates of iron, and the rattling of the chains, add greatly to the horror they excite.

To procure themselves a holy delirium, they inhale vast quantities of the fume of tobacco. They leap round the fire, roll their eyes and mouths in the most horrible manner, strike with their hands, scream dread-fully, call upon their gods by their respective names, and tremble in all their members. At length they appear to fall into a profound swoon; the ignorant spectators imagine that their souls are then separated from their bodies, and descend into the lower regions, where they hold converse with the malevolent deities. After this frightful ceremony is over, they acquaint their audience with the responses they have received from the deities.
The tambour is the chief instrument used by the Shamans for performing their delusions: by the power of this tambour they pretend to raise spirits, and oblige them to work miracles and unveil the mysteries of futurity. It is of an oval form, about three feet long, and covered with skin on one side only, similar to a tambourine; upon this skin are traced the representation of idols, stars, animals, &c. They strike the tambour with a small stick, which is covered with skin, in order to render the sound more dismal. The Shamans assert that, by the different modes of striking the tambour, they are enabled to raise or drive out spirits.