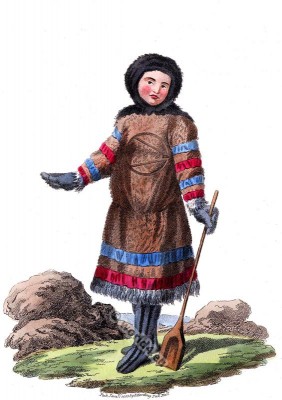 THE Samoyede women are better made than the men, and their features are less forbidding; they are, nevertheless, far from being handsome. They are, frequently, mothers at the age of twelve or thirteen, are past child-bearing at thirty, and never bring into the world a numerous progeny. Their dress so strongly resembles that worn by the men, that it is not always easy to distinguish them. In general, however, their garments are better made, and decorated with fringe, glass beads, and a variety of ornaments peculiar to the sex. They are particularly fond of trimming the edges and sleeves of their dresses with strips of bright coloured cloth, about an inch in width, or with glass beads, small plates of tin, &c. The married women divide the hair into two braids, which pass over the shoulders and descend the bosom.
The unmarried wear three of these braids, which hang down the back. In summer both married and single go bare-headed: in winter they wear hoods of black fur.
Generally speaking, the Samoyedes are poor: almost all, however, are masters of a few rein-deer, and some of the richer sort have as many as a hundred, and even more than that number. They make them supply the place of saddle horses, fasten them to their sledges, and make offerings of them to the gods: but they never put to death any but those which are in-capable of service. Like the nations of which we have already spoken, the Samoyedes have little or no bread; but rejecting no kind of food, they are never in dread of a scarcity. If, by accident, they discover an animal which has died a natural death, if a whale, already half putrified happens to be cast on their coast, they set themselves down, and enjoy, at their leisure, what they conceive to be the presents of their beneficent divinites. Dogs, cats, squirrels, rats, and ermine, are, however, excluded from their tables. We know not whence arises this disgust, and it is most probable they are ignorant of the cause themselves. The Samoyedes use no salt. Frequently, even in times of repose, they devour raw the flesh of quadrupeds and fish. Before their connection with the Russians, it is most probable, they never cooked their provisions, and that from this circumstance they acquired the name of Samoyedes, “devourers of raw flesh.” Since the introduction of kettles from Russia, they sometimes boil their food, but they never dress the fish that have been dried by the sun. Blood, still warm from the animal, is esteemed the greatest of all luxuries; they consider it as a preservative against the scurvy.